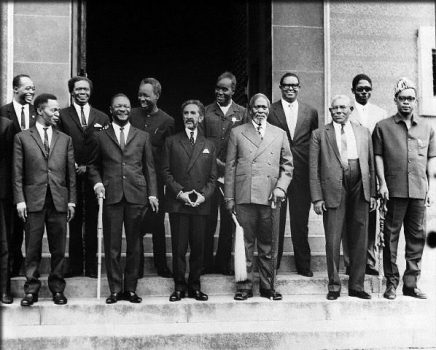 Despite Africa’s Illustrious Political Past, Why Are African Countries Failing?

Today, as these states have faded into modern postcolonial states, with centuries of colonialism in-between, it appears that those vital political expertise that the old empires used to keep large swathes of territories together has been lost…

Years ago, I read about the great civilisations that thrived in West Africa before the first Europeans anchored their great wooden ships in the Bight of Benin. The idea that Africa had an illustrious political history was especially interesting to me considering the political situation of many countries on the continent today. The earliest European visitors who saw the yellow, pristine beaches of West Africa had very fertile imaginations and chose to describe falsehoods about seeing humans with their heads on their bellies or their legs on their heads.

In the Classical times, Pliny had written that Sub-Saharan Africa was populated by “animal and human monstrosities,” and went on to describe some tribes without noses, some without tongues, some with a single eyes in the middle of their forehead, and others who had a dog as king. In 1563, Robert Baker, an English explorer, claimed that Africans are “a beastly savage people.” In the same period, one Portuguese explorer — cited in Snowden’s Blacks in Antiquity — declared that Africans had no hair. They have “no hair,” he wrote, “except for a few bristly strands on their head.”

These early encounters obfuscated the existence of thriving empires in West Africa and other parts of the ‘dark’ continent. In much the same way that great, politically-advanced empires existed in Europe and Asia before the modern age, Africa also has its own history of large well-run states and empires. Between the ninth century AD and 1600, there arose three great empires in West Africa. The earliest, Ghana Empire, developed a highly effective system of taxation that was far ahead of its time. Taxable properties were painstakingly recorded and tracked. An important system of immigration taxes was also developed.

The second empire, Mali, is reputed to be one of the wealthiest the world has ever seen. One of its rulers, Mansa Musa, is reputed to be the wealthiest man in history, advertising his country’s immense wealth in his famous pilgrimage to Mecca. Songhai, the largest and most intellectually advanced of the empires, was at one point under the visionary leadership of Mohammed Askia the Great, whose contributions to intellectual life saw the further development of the cosmopolitan city of Timbuktu. Aside the architecturally enduring Djenne Mosque, built with mud around the 13th Century AD and still in use today, there was the Sankore Madrasa or the Timbuktu University, and the development of a system where professors and scholars were rewarded with large pensions.

As African kingdoms expanded, so did their political structures. Expansions did not only happen by conquests, but also through the civil route of agricultural knowledge transfer, in which an agricultural group begins to exert control over a wide area as a result. This is what happened with the Nupe, the Bemba, and the Ashanti, to a lesser extent.

The Kingdom of Kongo was one of the earliest states to develop a peculiar federal system. Scholars have continued to study the complexity of Kongo’s effective system of government, and its ability to keep its federating states fully integrated and functional. Among the Igbo, the overriding factor of political control was the premier spirituality of the Nri clan; all the different Igbo federating clans recognised the spiritual superintendence of the Nri. Within each sub-group are several republican clans organised by the idea of political representation at a central assembly of elders or elder’s council. The Benin and Oyo empires also had complex political systems. Akinjogbin writes that the Oyo separated political power from the military and tried to check excess political power through a complex system of checks and balances. The military chief of staff, the Are OnaKakanfo, was made to live on the outer reaches of the empire.

Today, as these states have faded into modern postcolonial states, with centuries of colonialism in between, it appears that those vital political expertise that the old empires used to keep large swathes of territories together has been lost. A wide-ranging ignorance of the ancient political systems of Africa may be part of the reasons modern day African governments are operating on foreign political systems that eschew the importance of historical and indigenous cultural paradigms. These are systems that help countries retain the best practices of their political past rather than totally discard them in favour of foreign systems which are artificial to the peculiar needs of their immediate environment.

Buoyed on the wave of these systems and the artificial ways in which they were implemented in Africa, failing to incorporate the cultural and political identity of the land, modern African nations seem to be losing their grip on the machinery of state.

All over the African continent, governments are failing to hold their countries together. There are wars, insurgencies and often violent political upheavals keeping countries on the brink of destruction. In 2011, the world saw the Arab Spring protest sweep across much of North Africa in response to despotic regimes. More recently, it appears that military coups are on the rise again in West Africa, with the latest military takeover in the Republic of Guinea in February this year by Colonel Mamady Doumbouya.

As a result of these, there are economic crises, security challenges, ailing education systems and poor infrastructures. In Somalia, Central African Republic, and DR Congo, there have been decades-long insurgencies that have turned large areas of these governments into mere territories held by marauding gangs which the central governments have no control over. Majority of the countries in the top twenty-five of the Failed Countries Index are from Africa. There is also the list of poorest countries in the world in which African countries feature very prominently.

The conclusion is that there must be something modern African countries are not doing right that others seem to be getting right, for in history we have read about effective forms of government in African empires that led to immense economic, political and social progress. In Asia, China, for instance, has maintained a continuity of many of its core social and political values from the Han dynasty to this day; and this has rubbed off favourably on their current political apparatus.

The most common indexes of failing countries are economic crises and security challenges. These will in turn lead to political instability, disruptions of peace and ease of doing business. What are the origins of economic crises and security challenges? Many have laid the cause at the feet of self-centered political leadership. In Nigeria, issues are compounded by the agitations for self-determination by disgruntled entities who argue that they have been treated unfairly within the national polity.

The Igbo people of the south-eastern part of Nigeria were the subject of the Civil War. Today a lot of Biafran agitators believe they are marginalised in the aftermath of that war and stripped of economic power. In the southern Niger Delta region, the long history of agitation for economic and environmental justice are well-documented. When the likes of Ken Saro-Wiwa sought justice and was executed instead, the Niger Delta erupted with militant groups seeking to destroy Nigeria’s major source of foreign exchange, oil, which is solely exploited in the region. The major powerbrokers, erstwhile warlords such as Tompolo and Asari Dokubo, disrupted oil exploitation in a continuous wave of attacks when the government failed to assuage their grievances.

In the North, in the most recent fin-de-siecle, a militant insurgency seeking for the establishment of an Islamic state in Nigeria suddenly appeared. Constant bombings, kidnappings, killings by herdsmen, and other forms of disruptive activities ensued. The government has failed to neutralise these threats to the existence of the state despite the supposed military superiority. The most recent dimension of this security threat is the killing of the presidential guards who work in the office of the Nigerian president by elements of the Boko Haram in the nation’s capital city, Abuja. The conjecture is that if such an elite military entity could be so easily penetrated by the insurgents, how much more the rest of country?

As expected, the aftermath of security crises has led to severe economic hardship. The Nigerian naira has steadily declined to the point of near worthlessness, importers are having a hard time getting foreign exchange for their purchases and at very expensive rates, the prices of common goods are at an all-time high, the education system is on lockdown. In ancient Songhai, we saw how the government of Askia the Great effectively remunerated university teachers. In Nigeria, the Academic Staff Union of Universities (ASUU) has entered a new stalemate with the Federal Government in the recent strike action that has lasted nearly six months. Notwithstanding, there are still cases of corruption and public theft on a regular basis. Wealth disparities in the country continues to widen, and the poor are left to scrounge for remnants.

Many African political regimes today operate an ineffective administration that has spurned grievances across board. True federalism in Nigeria, for example, would solve a large chunk of its security challenges. In ancient Kongo, we find a federal system that at one point kept the federating units autonomous, merely paying homage to the centre. Each federating unit can have religious, political, and economic control over its resources.

The Igbo republican democracy, if effectively incorporated without the bogus practice we have seen today, will ensure more effective representation at the centre. We will also finally see systems where the military are kept away from civilian politics to avoid the kind of disruptions we find among African nations in which military despots take power for years without a corresponding economic development.

Chimezie Chika’s works have appeared in, amongst other places, The Question Marker, The Lagos Review, Praxis Magazine, Brittle Paper and Aerodrome. A finalist for the Africa Book Club Short Reads Competition (2013), he was 2021 Fellow of the Ebedi International Writers’ Residency. His interests range from culture to history, art, literature, and the environment.