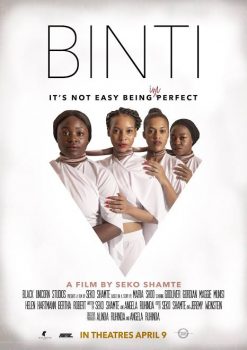 For all that it represents, Binti movie has good material. Women, at least, can find solace in the universality of its stories, in how it speaks to the shared experiences of women…

There will never be too many stories told onscreen about the joys and pains of womanhood. But at this point, there are not close to many. There are alarmingly few from Africa, with an even smaller number being brought to global audiences.

With its release on Netflix this January, Binti, a Tanzanian drama movie, joins that small number of African movies about womanhood to cross the boundaries of their country, a group that includes critically acclaimed films like the French-Greek-Algerian film I Still Hide to Smoke (2016) and Félicité (2017), the Senegalese drama set in Congo. Binti initially premiered on International Women’s Day at the Pan African Film Festival in 2021.

Seko Shamte directs the movie from a script she co-wrote with Angela Ruhinda based on a story by Maria Shoo, under the umbrella of Black Unicorn Studios, a production company which Ruhinda co-owns with her sister, Alinda Ruhinda.

A movie made by women and about women, and with a title that is the Swahili word for “daughter,” Binti follows the struggles of four women as they persevere through the difficulties of being daughters, girlfriends, wives, and mothers. There is barely any connection between the women. One woman went to school with the second who is friends with the third who knows the fourth.

Their stories are neither interwoven nor told together. In fact, each woman’s story is exhausted before the film moves on to the next, with each woman dealing with the pains of the life the previous woman longs for.

The opening story is about Tumaini (Bertha Robert Mloya), a young woman who has had to work extra hard to stay afloat since her father walked out on her and her mother (Betty Kazimbaya) ten years earlier. Tumaini runs a struggling convenience store and is drowning in a debt she cannot pay. Her only saving grace is that her creditor’s goons assume, stereotypically, that she is merely a saleswoman keeping the store for some man, even though it is her name that is written on the door.

Between her deadbeat father, the creditor’s disgusting goons, and a man from her past who will only render her assistance in exchange for sex, Tumaini has had her unfair share of problematic men. So, when a chance encounter in front of her store brings Angel (Magdalena Munisi) into the picture, Tumaini finds herself longing for the life that Angel has.

Angel and Tumaini went to school together, but while Tumaini seems to be stagnant, Angel seems to be the one with a perfect life. Angel has a bridal shop that is doing very well, and a seemingly doting boyfriend, Emma (Yann Sow), who proposes to her before her story has even really started. But behind closed doors, Angel is in an abusive relationship with a jealous and extremely violent fiancé, and it doesn’t get better with a baby on the way. As Angel’s story climaxes, a new face shows up.

Stella (Helen Hartmann) appears in Angel’s shop to sympathise with her before being carted away by her genuinely loving husband, Ben (Alex Temu), a scene very similar to the one which introduced Angel herself.

From the moment Stella is introduced, the film dives straight into her crisis. They drive from Angel’s shop to a hospital where they have a doctor’s appointment. Stella and her husband have been trying to have a baby, but natural conception is not working, and neither is IVF. “It’s not the end of the world,” her doctor says, and so, enthusiastically, she tries again.. No carbs. No junk food. No alcohol. She’s going back to the gym, and her exhausted husband had better make himself available.

It’s a long and brutal road for Stella and the devoted Ben, one that threatens to break their relationship. And even though Ben is content and will happily adopt a child if they must have one, Stella doesn’t believe they can ever be complete without her birthing their child by herself.

In a way, Binti movie is a lesson in “be careful what you wish for.” For each woman who enters the picture, the previous woman is left longing for what the new woman has. But the grass is hardly greener on the other side, and it is never worth driving oneself crazy for. Enter Rose (Godliver Gordian), the last of the four women. She has the family Stella longs for: a husband and two children who feel like too many.

While Rose’s husband, James (Jonas Mugabe), makes effort to contribute to parenting their children, he doesn’t make nearly enough effort to make reasonable impact. And as a working mother with bills to pick, Rose can barely juggle her job and her son (Kyan Ishau) who is diagnosed with a developmental condition. “It’s not a life sentence,” the doctor says. But it definitely feels like one, and it is a miracle and a testament to the strength of womanhood that Rose doesn’t crumble under the weight that she has to carry on her back.

Binti’s specialness is in the familiarity of its stories. Every woman is a woman you know or have heard about. Between the absent father syndrome, the domestic violence, infertility struggles, and the sorrows of motherhood, every woman’s story is a story you know. Essentially, they are all the same woman, beaten down by societal hurdles, but managing to find a way to live. But they are also different women, dealing with life in their own different ways. It is telling the extremes that some of the women go to in order to escape their harsh conditions.

It is just as telling how some of them refuse to cross any boundaries regardless of how desperate they are. In this way, the film presents a holistic picture of womanhood — that there is no one way to be a woman.

Even when the film takes the religious path, whether Christian or traditional, it still feels very familiar. Shamte positions religion as a coping mechanism for the film’s women, painting a picture of how reliant these women are on their faith. Tumaini’s mother wields her Christianity like the solution to all problems, declaring to her lamenting daughter, “You should be thankful I’m a Christian. I’ll pray for you.” And when Stella cannot understand what is preventing her from becoming a mother, she sets herself in the middle of prayer warrior women to bless her womb, before setting out to seek traditional spiritual help.

For all that it represents, Binti is good material. Women, at least, can find solace in the universality of its stories, in how it speaks to the shared experiences of women from different walks of lives. In fact, its Tanzanian characters will undoubtedly feel familiar to women from different parts of the world. But to find solace in it, one must first watch it. And it isn’t a very easy film to watch.

Binti starts off without spirit and remains dull most of the time. The dullness is almost certainly a function of the acting, with most of the actors rendering spiritless performances. But there are a few performances that stand out. Munisi’s first appearance as Angel is the first effort anyone makes to properly interpret a role. Sauda Simba Kilumanga, playing Angel’s mother, renders the most memorable performance, few as her scenes are. Jane Masha, as Angel’s friend, Doris, lifts the mood a little.

Gordian has the most effective scenes as Rose. And while Hartmann, very much like the film itself, is never able to find the depth that her character, Stella, should have, she puts in a decent effort. Yet, there is no truly striking actor, and these few only stand out because of the poor acting that surrounds them.

Unfortunately, Binti is a drag. It is one of those films that put so much effort into being films that they forget to be movies. You see the effort in the transitions, the ambitious shots, and the snippets of flashbacks neatly peppered across the film. And as the curtains are drawn, a spoken word monologue plays in the background, fiercely feminist, universally relatable, attention grabbing.

But the film itself does not hold enough interest to tug at heartstrings. Neither does it have the profound effect it seeks to have. Like its best actors, it only stands out because of the scarcity of films of its kind. It is an attempt to be grateful for. But we can only hope that future projects are more remarkable than this one.