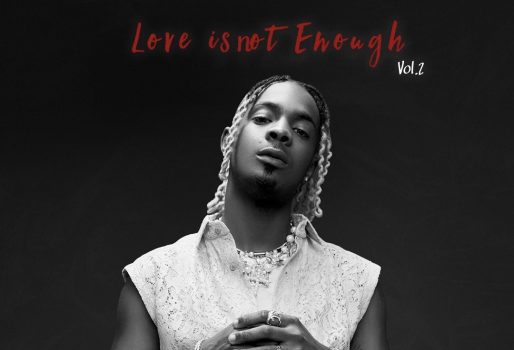 Young Jonn’s “Love Is Not Enough Vol. 2” is a Faulty Sonic Gamble

Is it safe to admit that Young Jonn is stuck in the alluring taste of his debut EP? Why did he feel he had to try the same sonic template again after only six months?

Only a small fraction of Nigerian music producers have been able to transition to being performing artistes. Masterkraft, Maleek Berry, Pheelz are just one of the few producers that have joined that train. This year, Young Jonn joined this group. Months after the monster success of “Dada,” and its remix, and also the triumph of his Love Is Not Enough extended play, the Chocolate City Music artiste returned with a sequel, Love Is Not Enough, Vol. 2, on October 21, 2022.

John Saviours Udomboso was born in Ibadan, Western Nigeria He grew up in Oshogbo and Ibadan, and attended the University of Ibadan for his first degree. While at this, Young Jonn explored music through singing and later, music production. He cut his teeth with Hit Factory studio, and this got him his first hit song, “Story for the Gods.” The success of this song led to more hits and more career boosts for Young Jonn. To put it in a better perspective, Young Jonn was, arguably, one of the most popular music producers in the 2010s.

Jonn took a break from production in the late 2010s and recently returned as an artiste. Chocolate City music had chaperoned this journey so far. Young Jonn, on his part, has churned out singles upon singles. The remix of “Dada” remains his most popular song with over seven million streams on Spotify.

In his bid to top up the recent success of “Xtra Cool,” Young Jonn released his new six-track project which featured the likes of Vedo and Davido with Niphkeyz, Sochee, Magicstikz and Jonn himself providing the instrumentals.

The mid tempo “Sokoto” sees Young Jonn laying down his guards, and gushing about a woman’s beauty. It’s a reassuring track, resplendent with sweet and enchanting lyrics. It is obvious Young Jonn is in love with the girl. He compares the feeling to his love of Koto, a popular street dance. In this two-minute, twenty-nine second long song, Young Jonn takes the listeners through his time out with his girlfriend, stating how he feels about her, and vowing not to go to other girls since the girl has all he needs.

(Read Also: Blaqbonez, Masculinity and the Psychology Behind “Sex Over Love”)

“Normally” starts with an eerie string. You might call it a typical R&B song. It gets enlivened as Young Jonn’s vocals come up with the percussion, synth and drumroll all colliding to form the bedrock of the song’s production. From the first words, “Loving you is my only bad habit,” Young Jonn welcomes you to his state of mind with this particular girl. The vulnerable Jonn comes to play when he begs the girl not to date anyone asides him. There is no doubt that he finds joy with this girl. “Normally” is what a relationship is expected to be like, Young Jonn seems to say.

Uloma becomes the muse for Young Jonn on “Xtra Cool.” The song is built around an emotionally unavailable boyfriend and his girlfriend. On this song, Young Jonn admits to his wrong doings which is primarily his business. He rolls out the effect Uloma has on him on this song. And although it sounds like Uloma likes him, you wonder if she would be able to cope with his busy schedule.

The title of this song invokes nostalgia in Millennials in Nigeria. “Extra Cool” was a popular free calling service back in the 2000s, and most lovers took advantage of the pro bono service to call their partners from 12am to 5am.  The phone service strengthened a lot of affairs, and it is no wonder Young Jonn says, “Uloma, I dey on my ten toe/I don tell you tire/ make we dey like extra cool/ Oh, can we go back to the time/ When this loving sheshe beere?”

“If You Leave” revolves around a super sweet experience. On this song, Young Jonn admits he doesn’t believe in love; yet, he is enchanted by the ways of the girl, and how she treats him. He becomes powerless at the point where he says, “If you leave, I go craze.” “If You Leave” is a soulful and funky song with Young Jonn riding on cheesy lyrics, fantastic log drums, and sublime backup singers to craft a project filler.

US-based singer, Vedo, comes up on “Next To You.” Young Jonn uses alluring lyrics to sway the girl to his side. Vedo adds more to this theme when he comes through. The song is more of a reassuring track to a lover.

Davido gave Young Jonn his most streamed song on “Dada Remix.” It is one of Davido’s best verses this year so far. From calling out the power couple,  Adekunle Gold and Simi with the line, “I fit to buy gold/ ko ba le jen si mi,” to his bragging lines and more, the DMW boss fully comes on board, even taking the theme of the track to another level. He understood the assignment and delivered. It is little wonder that the official video has more than seven million views on YouTube, a nod to its wide acceptance.

It’s two month to the yuletide, and artistes are positioning themselves for the biggest gigs and end of the year concerts. Young Jonn seems to be doing this, too. This extended play sounds like a positioning strategy rather than a means to boost his profile. Only three songs out of the six are new ones. Two tracks off this project, “Normally,” and “Next To You,” were already part of the first volume of Love Is Not Enough. You tend to wonder why they made the cut on this sequel.

Furthermore, “Sokoto” and “If You Leave” are cut from the same cloth. On multiple spins, you discover one is a build up on the other with half baked lyrics over a mid tempo production. A good A&R would have prevented this from happening.

Is it safe to admit that Young Jonn is stuck in the alluring taste of his debut EP? Why did he feel he had to try the same sonic template again after only six months?

Love Is Not Enough Vol 2 shouldn’t have seen the light of day. With the release of this project, Young Jonn simply rides on the wave of the success of “Xtra Cool” to garner more streaming numbers and also, most likely, get more gigs in December. This project lacks a good A&R, too. Worse so, it sounds rushed, and fails, unfortunately, to elevate the budding artistry of Young Jonn.