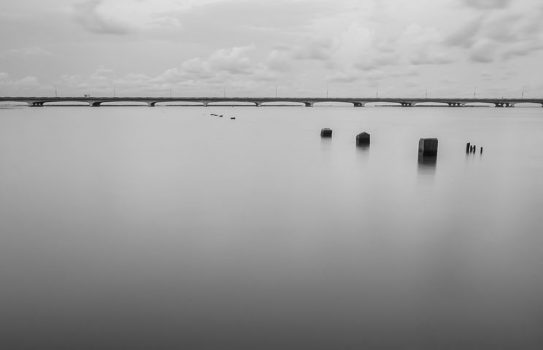 There Is Nothing Christian about a Road | Enit’ayanfe Ayosojumi Akinsanya

Their mothers will soon go to the backyard, a big cockerel squawking in their grip, to slit its throat. An unfortunate blood ritual for fortunate children…

I fly home to Nigeria, and the earth wears a new robe. Along the cup of Lagos, where I had arrived at its airport, the car bearing me homeward to Sagamu crawls with care. I had said to the chauffeur, “Please, gently.” I must have sounded like a virgin sex worker. My life is in his hands, and his money in mine. I will arrive home and forget his face for life. But I marvel that he obeys me. It is how his uniform clings to his beefy body, how his peaked cap sits, reminding me of the regimes that first chased my forebears from this soil.

“Yes?” I have overestimated him.

“Sorry o. The woman that came with you out of the airport, who hugged you goodbye, I thought she would go with us.”

Nigerians always say “sorry.” It is as if we are apologising for being colonised in the first place. He believes I have a girlfriend. I think of calling Jide and telling him about it, so he can laugh and I can laugh and I can rest, assured that when I go back, I will smell him again.

I press my nose to the side window like a child. I once read somewhere that you listened to Lagos with your eyes closed. Mine are wide open. I don’t want to feel; I want to see the chaos and the resplendence. Two Hausa men spread their onions on a stretched jute sack; next to them, a broad gutter flows with green bubbles. A woman stands before them, haggling. Her son is strapped to her back, sucking on his mucus and thumb. They are a distance from the car, but I can hear her bargain price. In Lagos, in Sagamu where I was born, in Nigeria, we shout. We only mutter when we want to wreck someone’s reputation. I knew this before I left, and it was why I didn’t tell my friends here that I was coming for Christmas. Jide will not stop laughing if he knows; he has always hounded me for being an SNA, a Superstitious Nigerian American. I push my phone from my lap, thrumming with the buzz of postponed desires. Two bus conductors writhe against the rusted chassis of an eighteen-passenger bus. They lock each other’s collar and yell in deadly pidgin. I go kill you today. You dey crase? Who you be for this area? And I know, soon, a bottle will break and cut things. People walk past them like nothing is happening. A “Mama Put” restaurant, slabs of wooden surfaces peeking from the beaded-curtains door, growls with demands from hungry danfo drivers and their agberos who need to “load up” before their next “load.” I catch a few of them swigging from small bottles of Chelsea and Striker gins. The next minute, they will sit behind wheels, on these Nigerian roads. I say a quiet but weird thanksgiving prayer. We would be long gone, I also pray, before they come behind us. I want my chauffeur to step on it. If I were an Igbo man in the 70s, I would still be at the Ikeja airport, answering black questions, because history had stained me.

We reach Berger. I have never understood the names Lagos carries, or why. “Lagos” itself—a Portuguese stretch—would have appalled the Awori Yoruba people that first lived on the land.

“Uncle.” My chauffeur again. I taste the word like an Amartem pill. I had forgotten the resilience of my people. “Should we take straight or Ikorodu?”

“Straight,” I reply, with a small irony.

Ikorodu. If I were a road, I wonder what they would name it. I would not appreciate cars and trucks rolling down my thighs day and night, leaving ratty exhaust fume and skid marks. I wouldn’t welcome drivers who hurl obscene comments at other drivers, and give them the finger or the five outspread ones, sometimes a neat ten if the insult needed emphasis. Sometimes, still, a weapon would be pulled out. Tut-tut. I would certainly throw them off my chest. Into the nearest bush.

My chauffeur asks me if he can play a song. I nod yes. He does, and it is a Christian gospel. I stare at a beggar child, her belly rotund and raggedy-looking, her eyes vacant, and shake my head. I think of the roads in Sagamu, without knowing exactly why. Maybe what binds us is knottier than history and clearer than a woman singing holy this, holy that, from the car stereo. There is nothing Christian about a road, unless you use it in Biblical analogies, like “the road to heaven” and all that jargon about what it was paved with.

And the streets are worse. They kill with a silent death. Ijagba is definitely the most sinful strip. Shrines still reign in vantage spots, undying kings of tradition and religion. Sometimes, when you walk past and glance into the etutu bowl, the blood that sullied the guinea fowl’s feathers is still fresh. Every hour, a bottle breaks. A child runs. Somebody’s intestines splash out. Every hour.

It means there is nothing Christian about a street, either.

Sabo watches too many of her bones clatter across its highways these days. People head for the banks on the other side of the road, for igba keresimesi withdrawals. A van comes crashing down and takes a couple in its legs. Blood spills, the road bathes, and for a while the sun can only shine red. It dries the road, as if it were rain.

Isale-Oko is where humans waste away in stuffy cells, in the gloom of the unknown, packed with rogers, untried, untreated. Seven years. Seventeen years. Sometimes, their babies are taken to them on a visit, tall seventeen-year-old babies. Their fathers do not know the colour of their shit in the diaper. They did not witness their first pubic shavings. Even now, if they had boys, they would not see the type of condoms these sons use, or if there was any sexual orientation to extensively discuss. Their cases—these estranged fathers—will never be opened, surveyed, treated and tried in the law court. At least not for a possible Christmas homecoming and reunion. They will be there on the shelves of justice, gathering dust and silence, casting time. Merry Krismas behind bars.

Ojumele is a cemetery of living people. The leave of money is most acute here. The friendship is strong, but it is dead.

Who is a dead strong man?

There is nothing Christian about this season of homecoming. But let every street celebrate the birth of the Godhead. When ADRON comes home, his patrol boys roll gently past the lane, like sorcerers holding wands, and the street lights of Ogunyanwo-Ojumele come on. And the night is born.

Tunmise in the house ahead is weeping a little more salt into the onions she is slicing. Her sister, Bolu, is picking the stiff chicken’s body dry. Both of them are shouting at their younger brother, Gbenga, to boil the water faster, as if he were the reluctant flames in their old rusty stove.

It’s Christmas Eve. It’s astonishing. It doesn’t look like a wet pot. The dust is mascara on my eyelids. My lip burst its skin a while ago. And people move about like desiccated mannequins.

I bathe by ducking. I run when I see cold water. I think twice, with my balls, when I see hot water. My dad has always said it is not good for a man. The sun plays hide and seek with the cold; my skin laments their joy. I cream the cracks, with extra rubbings. Even between my fingers.

The workers of the season—hairdressers, tailors, music artistes, livestock salespeople, restaurants, satellite cable subscriptions companies—behave as if the season had come and gone, and now they are left with lucid realities—as limp as weak dicks, yet as hard as a slap in the face.

It is Christmas Eve. There are no lights blinking, no yodeling from any house here, no tinsel decorations. But it is Christmas Eve. From our verandah, you can see the kids skipping around like hares, spry, wound up with anticipation, squealing, “Odún k’òla! Odún k’òla!” They don’t care if IBEDC would bring light or not.

Their mothers will soon go to the backyard, a big cockerel squawking in their grip, to slit its throat. An unfortunate blood ritual for fortunate children. Their fathers have parked their commercial kabukabus; they are heaving, dragging sacks of rice and jerry cans of groundnut oil from the boots. The neighbourhood boys join in the hauling, their faces and muscles shiny with avaricious delight as they lift basins of fresh peppers and tomatoes. Everybody must participate. Tomorrow, they will triplicate in number and their girlfriends will “paint face” and wear new bras and pants and come, and they will all troop to any house where the generator. is running and a large tray keeps coming and going. It is the survival of the shameless. Sometimes, they go with deep ‘coolers’ with firm covers. It is Christmas.

Tonight, firecrackers (called “bangers”) will scatter the streets, like a delightful war. If they fire a gun at Ijagba, who would confirm that it is not a banger strike? Sometimes, the pastor at a carol will receive one shot, and will have to careen against the glass pulpit, while the congregation ‘skabash’ against the unruly spirit of devilish children and teenagers.

But it is Christmas. And not only the choirs in Methodist, African, Anglican, Catholic, Pentecostal, and Redeemed have the right to make some fiery noise for The Birth. Everybody on earth was supposed to express some joy, whether it is their business or not. The first time it happened, this birth, no child had lived. So why not live now?

Thus, fire will split the earth.

If I were one of its roads, hell would be between my naked thighs. So how can a road ever be Christian? There is nothing Christian about a road.

We slide into the arms of Sagamu, just as the dusk lowers itself on us. In some distance, in the heart of Ojumele, eleven Noel pipers are piping to a lonely boy. Who sits somewhere, observing, listening, dreaming of the boy he once kissed, holding his loyal phone in his cold hands, sitting inside a chauffeur-driven car.

Enit’ayanfe Ayosojumi Akinsanya is a young, creative writer passionate about uncommon human stories. He is the first-place Winner of the 2022 intercontinental French Embassy Climate-Change Project Prize for Creative Nonfiction. His novel manuscript was a finalist for the 2018 National GTB Dusty Manuscript writing contest, and since then he has been growing gradually into a force to be listened to. His short fiction pieces, and essays have been published in Brittle Paper, The Kalahari Review, African Writer, Livina Press, The Shallow Tales Review, OBBLT, Fiery Scribe Review, Nollyrated, and elsewhere. He writes from Ogun state, Nigeria, and can be reached via adeniyiayosojumiakinsanya@gmail.com or +234 8135661370. He tweets at @Osumare_Ayomi.