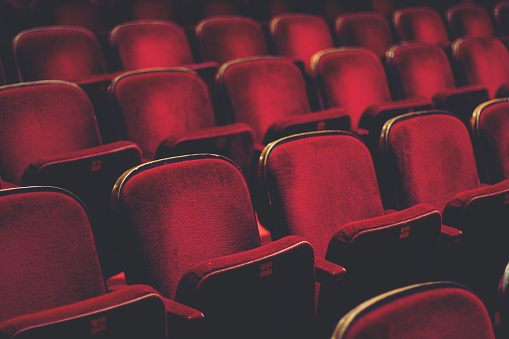 One of the first times I heard Johnny Drille was in The Royal Hibiscus Hotel, the 2017 Nollywood rom-com that premiered at the Toronto International Film Festival. His hit song, “Romeo and Juliet,” was one of many love songs that featured on the movie’s soundtrack. It was quite memorable, really, listening to his beautiful voice singing “Like Joke and Jake, our love will never grow old” not long after the real-life celebrity couple and Nollywood veterans, Joke Silva and Olu Jacobs were all lovey-dovey onscreen as an inspiring older couple staying at the titular hotel. This is just one of many experiences I’ve had with film music, one of uncountable experiences from billions of filmgoers.

Music is an essential aspect of filmmaking. It is so fundamental that even many silent films use music. Music can determine how audiences perceive the images onscreen. It can greatly affect the emotional undercurrent of a film and/or the overall tone. It can create fear, elation, depression, suspicion, anticipation and literally any emotion. It can transport a viewer to a fictional world or guide a viewer through a familiar world. It can become an anthem. And it can expose a viewer to music they’ve never heard before but will be eternally grateful to hear. A film’s music can be what ultimately sells it to audiences and critics, and what ensures repeat viewings. It can be the defining element of a successful film or, at least, a major attraction.

Just think of Hans Zimmer’s outstanding original score in Dune or the music feast that was Encanto. Think about Nick Cave and the Bad Seeds’ “Red Right Hand” that became synonymous with Peaky Blinders, or the Game of Thrones original theme song. If those are too far from home, then think about Fela Anikulapo Kuti’s “Let’s Start” on the trailer for The Harder They Fall and the film itself, or about Babes Wodumo and Sjava on the Black Panther soundtrack, or about Burna Boy’s feature on Sia’s “Hey Boy” as a bonus track on the soundtrack made from and inspired by the film, Music, or about the bulk of Beyoncé’s companion soundtrack to the live action remake of The Lion King.

Clearly, film music is an undeniable contributor to the global music industry.
Film music, as the name implies, is an umbrella term for music used in a film.

Film music comprises the score and the soundtrack of a film. Generally, a film score is original music (traditionally instrumentals) specifically composed for and tailored to the film while a soundtrack is a collection of recorded songs, often pre-existing but sometimes recorded specifically for the film, used in or for the purpose of the film. As exciting as it often feels to hear a beloved song by a beloved artiste as part of a film’s soundtrack, film scores are just as essential. Composing a film score takes special skill. A badly-composed film score can leave audiences feeling detached, confused or uninterested, and can dampen an otherwise decent film. A good film needs a good composer. And film music composers are musicians, too. In Africa, they might be getting recognised with film awards like the Africa Magic Viewer’s Choice Awards (AMVCA) and the Africa Movie Academy Awards (AMAA), but, as musicians, they also deserve to be acknowledged with actual music awards.

But why is it important to include these particular musicians in music awards? Do the organisers of the Headies or the Soundcity MVPs or any awards show have any obligation to reward them for their brilliant contributions to filmmaking or music? No, they don’t. But they don’t have any obligation to reward anyone, really. They hand out plaques every year as a form of recognition and encouragement to local talents. In fact, a headie, as the headie plaque is called, “depicts the image and the shout of a young, vibrant individual whose talent can challenge that of renowned local and international artistes combined, but who has almost lost confidence in his abilities in the face of discouraging circumstances presented by the peculiar Nigerian environment.” Arguably, Nigerian film music composers fit into that box.
Nigeria’s film industry, like its music industry, is plagued by peculiar disadvantages, from financial constraints to institutional challenges and the general disillusionment that comes with living and working in a country where almost nothing works. Even the job of just choosing appropriate pre-existing songs for a film or TV, with the goal of compiling a soundtrack with songs that collectively further the film’s goals, and getting the appropriate licences for the selected songs has to be particularly difficult in a system like ours. Several other African countries struggle with similar difficulties but still make ambitious projects with scores and soundtracks that put some big-budget motion pictures to shame.

Acknowledging these film music composers and music supervisors for their accomplishments in the field of music is really a matter of necessity.
Whatever the reason for the absence of film music categories in music awards, awarding film music is not unprecedented. The Grammy Awards, which awards outstanding achievement in the US music industry, has a Film/TV/Media field comprising three categories relating to music specifically for the purpose of use in a motion picture, television or other visual media. The categories are: Best Compilation Soundtrack for Visual Media, Best Song Written for Visual Media and Best Score Soundtrack Album for Visual Media. In 2021, the All Africa Music Awards (AFRIMA) announced a new award category celebrating the Best Soundtrack in a Movie/Series/Documentary Film, although the award was eventually suspended the same year.

It has to be remembered that awards are not coveted merely for the sake of covetousness. Of course, bragging rights soothe the ego. But awards tend to hold greater value than just bragging rights. Winning a reputable award generally increases visibility. For a film music composer, winning a headie, for example, could possibly translate to better deals in the film industry. For a composer who also happens to be in the music industry proper, such an award might also mean more employment in the music industry. Visibility is important in increasing opportunities and exposing creatives to better platforms for honing their skills, especially when said creatives are the type who work behind the scenes. With motivated and improved film music composers, the film industry will certainly feel the effects, and an improved film industry is an improved creative industry.

Besides, there has never been a better time for a synergy between the film industry and the music industry. The African music industry may already be having its global breakthrough, but the African film industry is closer than ever to its own breakthrough, with international film production companies, from Netflix and Amazon Prime Video to Sony and BBC Studios, licensing existing African content and ordering original projects.

In addition to the global attention that will follow a flourishing creative industry, there are also benefits to be enjoyed in-house. Music journalist, Chinonso Ihekire, projects that if the film industry is thriving, more musicians can license their music to filmmakers at good rates. Plus, as earlier noted, films can push out music to new audiences, promoting lesser known artistes and converting new listeners for already popular artistes. Personally, I have discovered several talented African artistes through movies, and I know I’m not the only one. At the end of the day, there is mutual benefit. The entire continent wins.