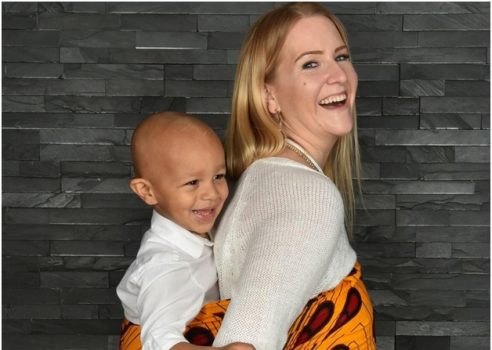 Nwanyi Ocha: on the Controversies Surrounding the Idea of a White Igbo Commissioner

Progressive countries have never been known to sacrifice expertise in the altar of fanfare. A deep knowledge on the Igbo culture and the tourism potential of Southeastern Nigeria would mean a thorough academic, literary and cultural knowledge of the place alongside being properly traveled. On this ground, does Nwanyị ọcha qualify?

“Nwanyi Ocha,” a 36-year-old Caucasian woman of Swiss origin, married to an Igbo man, has won the heart of many with her embrace of the Igbo culture and the regularity with which she flaunts it on social media. In the course of this time, Nwanyi Ocha has learnt to speak and understand the Igbo language to a large extent. She also appears to be deeply in love with her husband of 14 years, and their three children. Her Twitter bio reads, “Swiss blogger, married to onye Anambra and mother of three—interested in the culture, values and heritage of Igbo people.”

Last weekend, Nwanyị Ocha was caught in the middle of a social media controversy. An Igbo influencer, Afamefuna Ezenwankwo (@AfamDeluxo), an Igbo man married to a Caucasian woman, suggested that the incoming Anambra government considers Nwanyi Ocha for the role of Commissioner for Culture and Tourism in the light of her constant promotion of the Igbo culture.

The New incoming government of Anambra State should consider Nwanyị ọcha as Commissioner for Culture and Tourism. Her personality and tourist lifestyle will boost tourism in Anambra State. I believe Nwaanyị ọcha with a team of experts will do wonders in that sector. 🙂

Afamefuna’s tweet was endorsed by many, yet it gave rise to a lot of backlash on the other hand. The most rampant disagreement was from the Igbo blogger and illustrator, Lotanna, popularly known as Sugabelly, who first went on a tirade of verbal attack on Afamefuna and argued against his position from a racial vantage. Her argument, based largely from a racial perspective, led to some, like another popular influencer, Rinu Oduala, accusing Lotanna of reverse “racism.”

A white woman should be the Commissioner for Tourism in Nigeria because of what?

Are you a fool, an idiot, a moron, or all three?

This is why you oyibo lap dogs are the laughing stock of the nation, and a continuous disgrace.

Sugabelly argued that if a Nigerian woman from another ethnicity could not be considered for the same role, then a white woman could not. The controversial journalist, Nkiru Emordi, more well known by the anglicised version of her name, Kiki Mordi, adding her voice to the dissent, disagreed with Afamefuna’s suggestion, citing Chimamanda Ngozi Adichie, as someone who has “put her people on the map” without being rewarded with any position.

All the arguments tended to resolve the central question of by what yardstick Nwanyi Ocha should deserve the post of an Igbo Commissioner. Many argued that Nwanyị Ocha qualified because, by marriage, she was now an Igbo woman, and she had done more to promote Igbo culture than most of the Igbo women standing against the idea of her being an Igbo commissioner.

But for Sugabely and others, this was not enough – a white woman did not qualify if a Nigerian woman of another ethnicity besides Igbo was not to be considered for the same post. She went on further to cite people like Chinua Achebe, Buchi Emecheta, Chimamanda Adichie, who promoted Igbo culture, yet never held such positions in Igbo land, a stand corroborated by Kiki Mordi’s tweet.

Others even cited the case of Bianca Ojukwu, an Igbo woman from Enugu, and widow of Igbo leader, Chukwuemeka Odumegwu Ojukwu, who had been prevented from contesting for the Senate house in Anambra state where she married.

(Caveat: Chinua Achebe served as an ambassador for Biafra during the war, and vehemently stayed away from Nigerian politics afterwards.)

The problem with the argument of Sugabelly and the likes is that it seems to suffer from the insecurity of territoriality. In 2020, British singer, Adele, was attacked on social media for posting a photo of her in bikini and the African hairstyle of small twisted knots known as bantu–while celebrating the virtual Notting Hill Carnival, a very important festival in her London hometown. One of the people who attacked Adele tweeted, “If 2020 couldn’t get any more bizarre, Adele is giving us Bantu knots and cultural appropriation that nobody asked for. This officially marks all of the top white women in pop as problematic. Hate to see it.”

Another suggested that Adele had committed a big enough crime to go to prison for cultural appropriation. If cultural appropriation is the unacknowledged adoption of the culture of an oppressed or minority group, Adele’s accusers definitely had a point, even if they went to the extreme. Nwanyi Ocha, being married to an Igbo man, cannot be accused of the same.

The similar factor at play here is the whiteness of both women and the powers associated with whiteness. The people pissed off at Adele are an offshoot of those who invented cultural appropriation to dictate who “promotes” or flaunts their culture. Not many marginalised people care about cultural appropriation. The people who care suffer the insecurity of another group holding better prominence than they on account of their culture. This is where their similarity with Sugabelly and Kiki – whose main argument against Nwanyi Ocha is her whiteness – and those who attacked Adele lie.

One has to admit, though, that cultural appropriation has its peculiar advantages, especially in policing those who use the culture of marginalised groups to promote their selfish interests. In the case of white women, there is usually more backlash because of the innate reverence for whiteness embedded in the consciousness of coloured people. This is asource of insecurity to the minds of self-appointed gatekeepers of culture. Africans are prone to give more credit than is necessary to a white person who adopts one of their cultures.

A white woman putting on an Igbo or Yoruba dress, all of a sudden becomes a beacon of cultural hope. “She promotes the culture,” those in awe of her are likely to say, because the mindset is that a white woman who brings herself to identify with the marginalised culture does that culture a favour. It is this same mindset which led to the suggestion that Nwanyi Ocha be made an Igbo commissioner for simply adopting and advertising her husband’s culture.

Assuming the answers to these questions were yes or no, did it disqualify her, even if she had everything it took, to move the culture and tourism in Anambra state to the next level, better than most Igbo women? What is more important; that the Igbo culture is promoted, or the colour of the skin who promotes it? Or do we say because we live in a country where ethnic bias is the order of the day, we overlook the racial slur in saying a woman did not deserve the position because she is white?

It is important, too, to point out that neither the people who support Nwanyi Ocha being made an Igbo commissioner, nor those who oppose it have made the soundest argument on the matter. The best argument has neither been made for why she deserves the position, nor has one been made on why she does not. In all the arguments on social media, competence and goodwill, the most important qualities a Commissioner of Culture ought to have, seems to have been largely overlooked.

There are people who argue that black people, including Igbos, have been appointed in very important and strategic positions in various European countries. This is true, only to the extent that these people were not appointed solely for promoting on Twitter the culture of the respective countries in which they were appointed, or because they had clout. They were appointed for their exceptional performances and knowledge in their fields.

Progressive countries have never been known to sacrifice expertise in the altar of fanfare. A deep knowledge on the Igbo culture and the tourism potential of Southeastern Nigeria would mean a thorough academic, literary and cultural knowledge of the place alongside being properly traveled. On this ground, does Nwanyị Ocha qualify? It is not an impossible benchmark for a white woman to have such an in-depth knowledge of the Igbo culture, as is expected of an indigene.

Black people do it all the time in the west, and white women have done it before in Africa. Right beside Adiele Afigbo, one of the most important Igbo academics and historian who wrote very important books and helped map out the Igbo culture was Elizabeth Isichei, a New Zealander, married to an Igbo man in 1964. So it is perhaps, important that we re-examine the standards which we request of the Caucasian allies of our cultures.

There is more fanfare and racial bias than there is logical objectivity in Afamefuna’s argument. It is important to reinstate that whoever should hold sensitive positions should merit them and not be rewarded with them. Perhaps, the opposition would have had a more weightier argument if they reminded Afamefuna of this.

His marriage to a Caucasian woman easily gives away the flaw in his bias. On account of this, Sugabelly accuses him of being a white lap dog, suggests that he is a fool, an idiot, or a moron – or in fact, all three. However, she forgets that the only case she had against the white woman is the colour of her skin, and perhaps, the bigotry of her people, which is no evident fault of Nwanyi Ocha’s.

Nwanyi Ocha, rightly, is an Igbo woman by virtue of her marriage, but is being an Igbo woman and flaunting it enough for one to be given a position as sensitive as Commissioner for Culture? Is one’s fascination with the human brain enough to qualify one to be a brain surgeon? Perhaps, if we asked more questions like these, in the future, we would have less people suggesting we made commissioners out of people solely because of their personality, social media clout and lifestyle.

What is disappointing about the argument of whether Nwanyi Ocha qualifies to be an Igbo commissioner is the quality of the arguments and its accompanying sentiments. This is further proof that we need to be more introspective about our insights to political and cultural issues, because we are only as good as the quality of our thoughts, sentiments and arguments.

Michael Chiedoziem Chukwudera is a freelance writer and editor. He contributes pieces on Culture, literature and music to Afrocritik. Reach out to him at Chukwuderamichael@gmail.com, or follow him on Twitter @ChukwuderaEdozi.