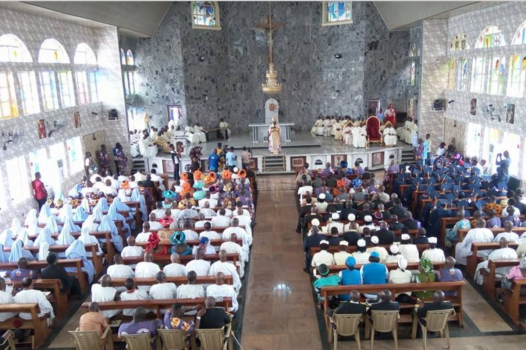 The spread of Christianity was a very pivotal factor in the eventual success of colonial conquest in Eastern Nigeria.

Though primarily a political conquest, colonialism worked its way slowly into the consciousness of the natives through the irresistible cocktail of religion and Western Education. The education which the white man brought with him, was like a light that showed one a whole new world. It was the intention of colonialists to replace the traditional religion of the natives. They acknowledged that religion was a major factor in shaping the cultural ideology of a people, and they knew that Christianity was particularly useful in manipulating the communal consciousness of a people and making them welcome the colonial ideas. In Igbo land, for example, the colonialists found it very difficult to directly penetrate the communities because of its complex and decentralized system of government. Away from the divide-and-rule antics later employed by the colonialists, religion was particularly important in the eventual success of colonialism in Igbo land.

The Anglican and Presbyterian churches achieved modest success in some parts of Igbo land, and the Catholic Church achieved even more success. As the decades rolled past, Christianity slowly replaced the Igbo traditional religion as the major creed of the Igbo people. The success of Christianity in Igbo land is tied to various factors, one of which is the symbolism prevalent in Christianity which resonated with that of the Igbo religion. There is also the history of Christianity as an Abrahamic religion that originated from Judaism, the religion of the Jews. So powerful is the latter factor that today, there are many Igbo people who refer to themselves as “the lost tribe of Israel” and proudly identify as Jews. The similarities between the historical and cultural nuances of Christianity to that of the Igbo religion have often been overlooked.

Contrary to popular opinion, “religious colonialism” worked by way of substitution and not elimination. The success of the colonialists in introducing a new religion to the people was not really dependent on giving a superior pose to the “white man’s religion”. The British colonized India too, but it is on record that death on the cross, as a sacrifice of atonement for the sin of the whole world hardly made sense to even the most illiterate Indian. The Hindu religion is one that abhors the shedding of animal blood, so it was almost impossible to convince them of Christianity, a religion at whose core was Christ’s death. There was no resonance between the religion of the natives and the religion of the colonialists. So there was nothing to replace, and eliminating the religious culture of the Indians who numbered about 300 million at the time, was not possible.

In Igbo land, the opposite was the case. The main difficulty with this new religion lay in the narrative that God had a son, and that the Son was equal with the father. Both religions viewed God the creator similarly, saw animal sacrifice as an appropriate way to atone for sins, if the Bible’s Old Testament is anything to go by. Igbo religion even provided for the use of human sacrifices in dire situations, as with Christianity where Christ (purportedly) dies to pay the ultimate price for the sins of humanity.

The psychology of resonance is a deeply underscored factor in the success of Christianity in Igbo land. In drawing parallels with Igbo traditional religion, the orthodoxy and deeply symbolic nature of Catholicism give it an edge over other Christian denominations. The sacrifice of the mass where bread and wine are offered as the body and blood of Christ for the atonement of sins, amusing as it must have sounded when it was first introduced, eventually made sense to the natives. Catholicism also filled another void that other Christian denominations could not readily fill: it replaced the worship of smaller gods and ancestors with the veneration of saints, through which Catholicism teaches its adherents to approach God. Today, the Igbo people are predominantly Catholics.

To provide historical context, Catholicism itself has a history of substituting Roman gods with Bible figures. It is said that the Blessed Virgin Mary replaced Venus and St. Peter replaced Jupiter. This method of substitution the easiest way in which the Romans could have been made to embrace Christianity. This marriage between Christianity and the Roman culture gave rise to Catholicism.

The spread of Western religions throughout West Africa owes its success to the resonance between the colonial and indigenous cultures. This fact does not appear so bare-faced because of the lack of consciousness among the indigenous people, who are made to believe they have been shown the light of a new religion. Conversion to Christianity meant doing new things in new ways as opposed to doing old things in new ways. The similarity, rather than difference in symbolism, is the reason why Christianity, and Catholicism in particular, successfully infiltrated Igbo land.