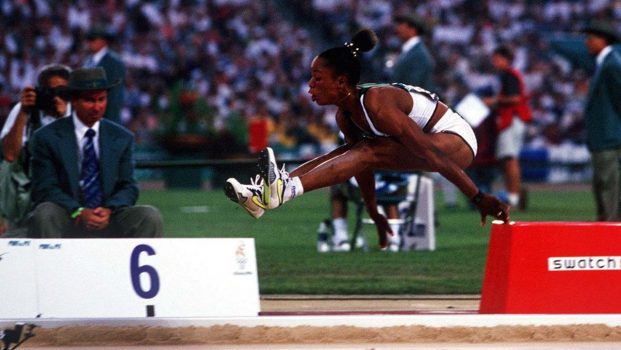 Chioma Ajunwa: Is Her 25-Year Wait A Symptom Of A Fractured System?

Very recently, it was reported that Nigeria’s first and only individual Olympic Gold medalist, Chioma Ajunwa, finally received the gift of a house promised her by the Lagos State Government, 25 years after the promise was made, and barely a week after a news report in which the Olympian narrated in heartbreaking detail how successive state governments had failed to honour their promise to reward her for flying the national flag on the world stage two and a half decades ago.

Ajunwa’s revelations surprised people who struggled to understand why such an honour was denied before the national gaze for a quarter of a century. The bewilderment is not out of place, and it ultimately gives rise to one question: how did this happen?

When the news broke that the current governor of Lagos State, Mr. Babajide Sanwo-Olu, had finally awarded Chioma Ajunwa a house, pictures of the former athlete in her police uniform covering her face in a catharsis of joy circulated the internet. This display of joy is relieving and heartbreaking at the same time: relieving for the fact that this national hero lived long enough to finally receive what belonged to her at the grand age of 50, and heartbreaking because this illustrates the story of many people who have brought glory to this country but whose heroics never got the appreciation it deserved. Some of these patriots have died, poor and neglected, after years of waiting in vain for a government that doesn’t seem to care.

From literature to sports, from the visual arts to academics, there are people who bled themselves dry for Nigeria, but whose efforts have gone unrewarded, even in death. In some of these scenarios, it could be said that there were no clear-cut promises, which paints an even more gory picture of neglect.

There are a number of questions that may arise in analyzing the Chioma Ajunwa situation, but they all point to an incredible degree of absurdity. Was she abandoned because she is Igbo? Did the government ignore her simply because she’s a woman? Away from the probability of gender and ethnic prejudice, it’s important to explore the sub-par performances of Nigerian athletes at international events since the period between 1994 and 1996, when they peaked at all levels of sport. At the 2012 London Olympics as well as the 2016 edition in Rio, the Nigerian team returned with no medals! Compared to the outings in 2004 and 2008, it’s been multiple steps backward for the Nigerian contingent. Where is the motivation to compete, however, when the likelihood of being kicked to the curb looms every now and then?

Chioma Ajunwa has navigated a thankless job under a horrible system at the Nigeria Police Force for decades. She has done her job without incident over the years, but if patriotism goes unrewarded, what then is the essence of putting the country first? How will the younger generation of Nigerian sportsmen and athletes, some of whom Chioma Ajunwa caters to at her foundation based in the Southeast, be inspired to excel?

Does the Nigerian leadership have a think-tank that examines these issues? The answer is in the negative. Ajunwa’s story provides the perfect justification for the next generation to exhibit apathy rather than patriotism. Who wants to wait 25 years before they finally receive what they deserve? The worst part about it is that there are no arrangements being put in place to ensure that a repeat of the Ajunwa scenario does not occur.

Every occurrence in Nigeria these days serves to further erode the rapidly-diminishing belief in the country. Sport has been one of Nigeria’s greatest unifying forces, but over the years, the government has neglected this sector just as it neglects everything else, and the failure to reward high-flyers or even invest in future champions is very indicative of the government’s priorities. Chioma Ajunwa’s story is not a call to a national discussion, nor does it teach any moral lesson. It is only a heartbreaking depiction of the spectacle that Nigeria currently is.