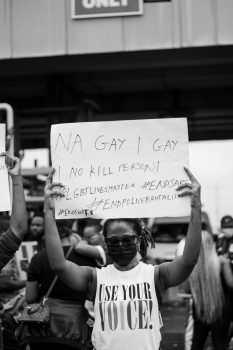 Being Feminist And Queer In Nigeria: A Double Whammy

Queer women in Nigeria have always been at the forefront of feminist activism geared towards resisting and calling out patriarchal oppression that enforces cis-hetero-normativity. They also face state-sanctioned queerphobic marginalization, just like queer men. In Nigerian society, they find themselves fighting on both fronts, as they experience both queerphobia and misogyny.

Although women with intersecting minoritized identities (black, queer, poor, queer, disabled, etc) are seldom remembered or given visibility when curating history, queer women have been present in the fight for the rights of women and the LGBTQ+ community. Audre Lorde, Lorraine Hansberry, Alice Dunbar-Nelson, Alice Walker, bell hooks, Frida Kahlo, Angela Davis, are just a few examples of queer women who have made monumental contributions to human rights activism.

The voice of LGBTQ+ women in Nigeria needs to be heard in society as they navigate the double-layered war fronts of queerphobia and misogyny. Queer feminism brings inclusive progress in movements that are concerned with liberation for women and queer people.

Clara, 20, a pansexual and panromantic woman who fully embraced her identity in 2018, defines her feminism to be ingrained in her everyday life, teaching her to know that she is deserving of everything she wants to attain as a human being. She believes that every woman should open their minds to feminism, even when variants of it may seem foreign to the average Nigerian woman.

“For any woman who wants to live life to the fullest, feminism will grow on and find you,” she says.

Clara adds that understanding her queerness and feminism became easier as her view of the world expanded. She has made deliberate efforts to not go to unwelcoming places, and this has helped her to not suffer any experience of exclusion. The feminists around her have never been hostile to her queer identity, and the queer men in the spaces she finds herself in have never been misogynistic towards her. She regards any feminist(s) who is not queer-inclusive as someone who truly does not grasp the notion of inclusion in society and does not see how anticlimax it is to not open their minds to learn more.

“You can’t fight for your inclusion in a system while leaving out other people from yours,” she notes.

Elizabeth, 22, says she embraced feminist views since 2016. Equality for her means the guarantee of socio-economic rights for women and the freedom to navigate society without oppression or dehumanization, as well as the freedom to be an independent entity free of social expectations and dogma.

“Freedom is what I consider Feminism to be,” she says.

Unfortunately, Elizabeth does not consider feminist spaces in Nigeria to be LGBTQ+ inclusive. According to her, too many times she has felt like she had to choose between her queerness and womanhood, when in fact, they intersect.

Homophobia and transphobia are prevalent even in human rights activist spaces in Nigeria, where many people are conservative. Even some of those who claim to be liberal still share exclusivist views on the rights of marginalized groups that are not heterosexual. Mainstream Nigerian feminist spaces are still devoid of inclusivity and intersectionality, due to the default outlay of Nigerian society, in which many people do not see the need to expand their views on issues that do not affect them.

Elizabeth also encourages the LGBTQ+ community in the country to not be silent on the issue of misogyny as it affects queer women in Nigeria. In these parts, feminine-presenting queer men are not considered “man enough” outside and even within the community, because of the sexist attributes and stereotypes attached to “looking like a woman”. She gives an example of James Brown, a social media personality who, despite receiving mixed treatment from Nigerians for being feminine-presenting and perceived as queer, has made comments that border on the misogynistic. Kito attacks on queer women, corrective rape, police brutality, and physical as well as sexual assault, are issues that affect LGBTQ+ women in the community, but that are often overlooked and ignored.

“There is a large epidemic of misogyny in the queer community, where queer men view queer women as tools to aid their freedom, but not as equals”, she explains.

“In Nigeria, fighting for your rights as a human is worse when misogyny and homophobia function like the coat of arms,” says Milola, a 24-year-old pansexual woman. She wants more Nigerian feminist spaces to interrogate and get rid of internalized misogyny, elitism, homophobia, transphobia and the desire to appear “respectable” to an oppressive system. For her, feminism is a chance for everyone to have a voice.

Milola also expresses a concern for queer women to be accurately and equally represented within the LGBTQ+ community just like queer men. She highlights the need for the men in the LGBTQ+ community to acknowledge their male privilege and try their best to not perpetuate misogyny to any woman, queer or not. She argues that being queer does not give any man a pass to be misogynistic or be exempted from accountability based on sexism.

“We in the (LGBTQ+) community need to learn to respect each other, and not forget that misogyny hurts just like queerphobia,” she says.

Queer women have to deal with misogyny from both straight and gay men, while those who are polysexual i.e attracted to more than one gender (bisexual and pansexual people) experience monosexism. Omeife, 18, is a bisexual woman whose embrace of feminism has taught her to embrace her sexuality and not be ashamed. According to her, she experiences misogyny and biphobia.

Monosexism, like biphobia and panphobia, is discrimination against non-monosexual people who are attracted to two or more genders. Bisexual and pansexual people are stereotyped as confused or expected to “just pick a side”; they receive harsh treatment even from some lesbian women who shame them for being attracted to men or regard them as “promiscuous” or “inherently unfaithful”. On the other hand, straight men fetishize bisexual and pansexual women as a gateway to their sexual fantasies, such as threesomes. All these experiences stem from queerphobia and misogyny.

“It’s either I hear ‘how can you be a woman and not cook?’ or ‘you are not bi, you are confused’ from people”, says Omeife. She notes, however, that she has never experienced exclusion in feminist or queer spaces.

She acknowledges that finding online communities can help one connect with people that share similar experiences, thus providing a sense of validation and realization that they are not alone.

Queer feminism is reminding us that at the heart of activism for women’s rights and queer rights, women with LGBTQ+ identities are very passionate about challenging and ending the joint oppression of queerphobia and sexism. They fight two battles, and they are not losing to the patriarchy by any means.