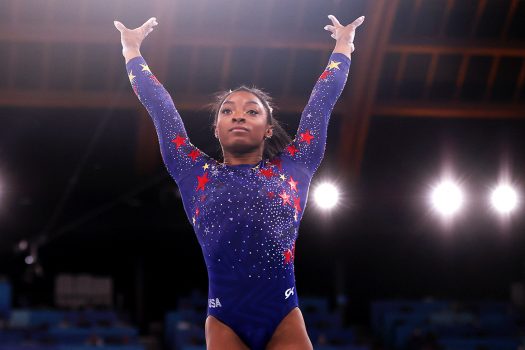 Sports And Mental Health: Why The Simon Biles Story Is Important

In the run-up to the Tokyo Olympics, much of the spotlight was beamed on Simone Biles.  She was the “face” of the Olympics, receiving the sort of media attention accorded to swimmer Michael Phelps and sprinter Usain Bolt. A four-time gold medalist, 24-year-old United States athlete Simone Biles had captured the hearts of millions of sports enthusiasts. Her routines were the hardest, but she aced them, gracefully tackling even the hardest bars with a smile on her face. The United States, nay the entire world, had their hopes pinned on Biles, expecting her to bring some shine to the Olympic Games and more importantly, provide some smile-worthy moments in a time blighted by uncertainty, no thanks to the COVID-19 pandemic.

Thus, it was a shock when on Tuesday, July 29, 2021, Biles announced that she was withdrawing from the team finals, citing mental health concerns. She subsequently pulled out of the individual all-around finals. Earlier in July 2021, 23-year-old tennis champion and four-time Grand Slam winner Naomi Osaka withdrew from the French Open, and subsequently from Wimbledon, for mental health reasons. Born to a Haitian-American father and a Japanese mother, Osaka shot to the limelight after winning the US Open and Australian Open back-to-back between 2018 and 2019. She broke a 17-year-old record previously held by veteran Jennifer Capriati and soon became the highest-earning female athlete, ranking above Serena Williams, and even earning her a place on the list of Sports Illustrated Sportspersons of the Year in 2020.

However, these successes, which came within a short period of time, burned her out and made her susceptible to a mental breakdown occasioned by intense pressure. Speaking after withdrawing from the French Open, she revealed that she had suffered bouts of depression after the wins she secured in 2018. In an article for Time Magazine (published in June 2021), Osaka called for more concerted efforts to protect athletes and their mental health.

Sporting activities in general, and athletics in particular, take their toll on the body. Staying in top physical shape requires high levels of discipline. However, not enough attention is paid to the mental health of these athletes. The internet is replete with stories of athletes who overcame their deficiencies at different points in their lives to become stars. Curiously, we are reluctant to tell the stories of athletes who tried hard to compete without succeeding and had to check out of the sports scene because they felt like failures.

Mental burdens are exacerbated for “successful” athletes. This is especially the case for those who hold records. Thus, they not only have to put up a good showing, but they also have to battle everyone else to keep the top spot. Biles, for instance, has won a gold medal in the last four editions of the Olympics.  She is the most decorated gymnast of all time and was tipped to win multiple medals in Tokyo, which would have made her the most decorated athlete ever. The pressure can only be imagined.

The same applies to those who are the “faces” of their countries, those with phenomenal success stories. Osaka was just a year old in 1999 when Serena Williams won her first Grand Slam title. Coming full circle and winning against Williams in 2018 is the stuff of inspirational books and movies. After lighting the Olympic cauldron to open the games, the 23-year old described the experience as “the greatest athletic achievement and honor I will ever have in my life”. Layered underneath that simple tweet was the weight of expectations, pointing to the place Osaka has come to occupy for not just Japanese youths, but young people all over the world.

For the Osakas and Biles, every move and every decision is subjected to heavy scrutiny, the bar set unbearably high. They labour under the pressure of carrying the expectations of millions. For them, failure cannot be contemplated because it does hold weighty consequences beyond just losing the prize in the competitions. Osaka, for instance, had to deal with huge media backlash following her decision to withdraw from two Grand Slam competitions. Considering then that mental health is not given pride of place in the discourse about athletes’ fitness for games, how then does it come as a surprise when they suffer breakdowns? Who wouldn’t?

Mental pressure is a fact of competitive sports. Try as we might, it is impossible to erase it and how it affects athletes. However, we can (and should) be more open to conversations about the mental health challenges these athletes face. We can be more “forgiving” when our favourite athletes fail to meet the mark. Forgiveness is even inappropriate in this context because it suggests a wrong, and putting oneself first is not something to be forgiven for. So, perhaps we could be more understanding and more empathetic; these athletes are not super-human.  We should respect the decisions of athletes to protect their mental health; Osaka’s insistence on not granting press interviews after each game should have been respected by all. We should be more human, viewing athletes as worth more than just titles and medals.

The remarkable support that Biles has received is commendable. Celebrities like Justin Bieber, former FLOTUS Michelle Obama, and inaugural poet Amanda Gorman have all sent in words of encouragement. The interest (and furore) that the withdrawal has generated is largely because Biles is a global sports icon. However, it is also because mental health concerns are not unanimously regarded as a valid reason for withdrawing from sporting events. Hopefully, we will get to a point where mental health is more than just an “exotic topic” for media publications. Hopefully, we get to the point where everyone realizes that it is just as worthy of full attention as physical injuries.