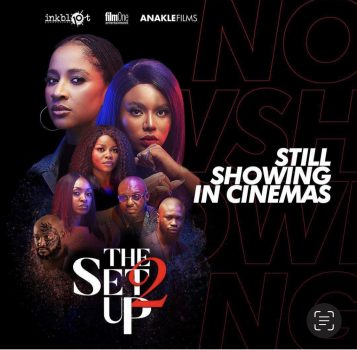 The “Set Up 2” Review: Chinaza Onuzo’s Latest Release Focuses on Aesthetics and Lacks Depth and Clarity

Set Up 2 is plagued by disjointed scripting. This is now a recurring flaw, visible in movies with monocratic leadership, having been written and directed by one person. Hence, it is likely that the scripting did not have the privilege of  external opinion and constructive criticism…

For every one that saw Set Up 1, expectations are high to see what the sequel brings. In Set Up 2, Adesuwa Etomi Wellington, Kehinde Bankole, Tina Mba, Jim Iyke, and Uzor Arukwe reprise their roles in the prequel. Nancy Isime, Lotachukwu, Stan Nze, Blossom Chukwujekwu, Kate Henshaw-Nuttal, and Tope Olowoniyan join them. The crime thriller takes 1 hour and 45 minutes to portray an ambitious yet undeveloped story.

The movie starts with a quick recap from the first part: Chike and Grace’s life journey and how Chike lands in the nets of US security and has to work for them to avert jail time. Chike receives her first mission in the first 10 minutes to bring in Moyowa Kuku, an alleged arms dealer. While executing this mission, she meets Usi (Isime) for the first time. The movie progresses to Dimeji (Arukwe) expressing how happy he is that they get to live a life void of Chike. Right after, Grace senses someone outside and goes outside to attack the intruder. She then calls out on the rest of the intruders who step out of the shadows into her house and manage to take away her daughter and nanny.

While it does not tell how long it has been since the first part, we get to see the beautiful mother-daughter moment between Grace and Pelumi, whom she had with her pastor boyfriend. Off to an unrealistic start, the movie tells the story that Chike is wanted and banned from stepping foot on Nigerian soil. But for a trained assassin, she is a reckless spy who moves plainly in broad daylight on the streets as though free. The writer manages to script in Usi and draws vague lines to justify her appearance.

Chike is on a mission regarding the kidnap of her niece. She receives intel on the situation of things and must not let her emotions get in the way. Chike abruptly abandons her mission as Usi blackmails her to do her work in exchange for her niece.

This sequel is unsatisfactory and lacking in depth. It has all it needs to excel but falters all the same. From the plot to the themes to the acting, there is just a lot the movie could have done better. With a cast preview, you would think, “what could go wrong?” But the truth is, everything can go wrong with the directing. Few sequels from the neo-Nollywood industry have been successful — Living in Bondage: Breaking Free, King of Boys: The Return of the King, and Wedding Party: Destination Dubai. Still, Nollywood has recorded several imperfect sequels in Chief Daddy, Ghost and the Tout Too — in the first half of the year. The flaws in Set Up 2 do not come as a surprise, as the directing seems more focused on aesthetics. 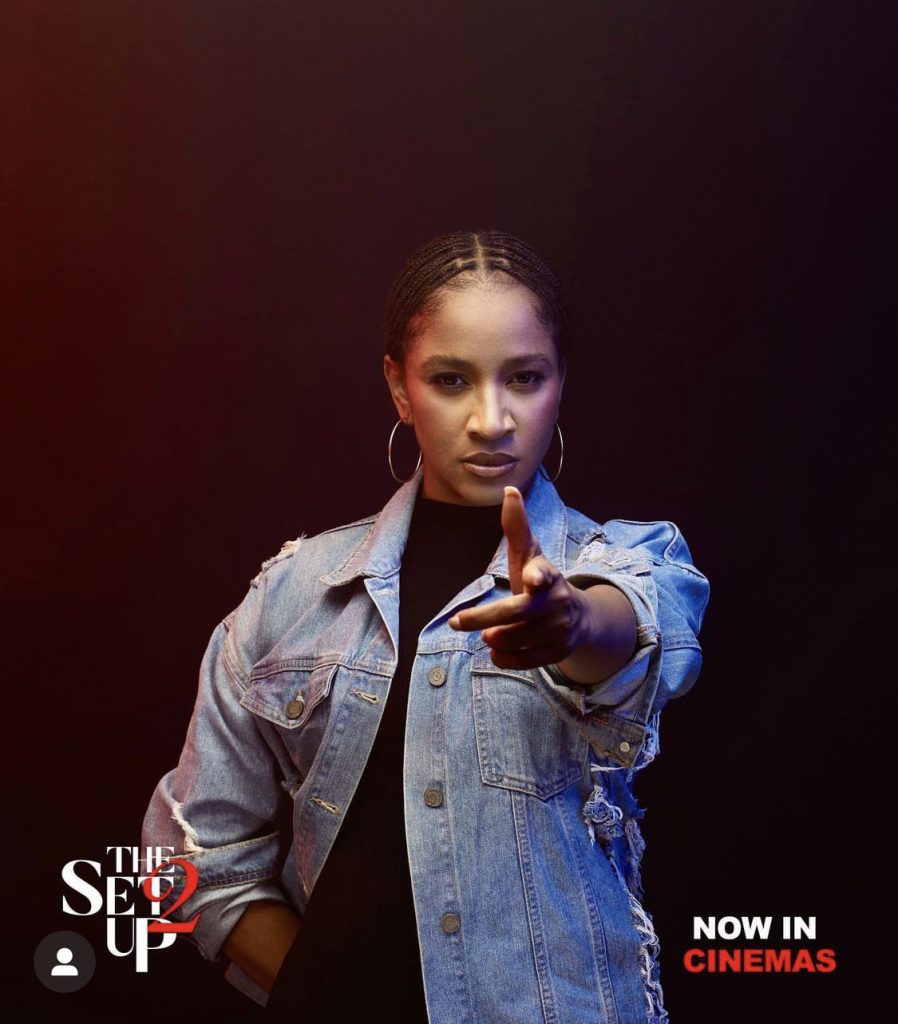 The director must have mistaken the crime thriller for a fight thriller, as so much energy and time is in fight scenes, most of which are unnecessary and slow. The ace acting comes from screen veterans Henshaw (Teju) and Mba, who plays Madame, a character in the first part, now an inmate after being betrayed by Chike and Grace. As entertaining as most of the fight scenes are, they are just too unreal. Why risk getting punched before launching your own? Slowing the fights is excusable, understanding that the actors are not professional martial artists. However, it seems like the post-production team forgot to speed things up just a little.

A repeated motif in the franchise is the assumption that instead of being charged with jail time, the US government would instead enslave its offenders into becoming their puppets. I begin to wonder if this is based on facts or mere assumptions. Thankfully, just like in the prequel, there are no gendered stereotypes, as, for one, women are the highlight. From their pretty faces and good martial display to being emotional and soft when necessary. While portraying the women as strong and opinionated, their emotions are used as a weapon to force them to do things.

The character of Teju is a complicated one. The story does not tag her for who she is. Is she the Director of Security for the US, or for Nigeria? However, it is likely to be the latter, as her words imply. (“I will do whatever it takes to protect my country.”) These were her words in response to Chike’s assertion of her inhumanity. While we try to make sense of Usi’s appearance, a plot twist reveals her as a cancelled patient, who not only tells a bewildering story about her life but now fights for a good course — which we never get to know.

Set Up 2 is plagued by disjointed scripting. This is now a recurring flaw, visible in movies with monocratic leadership, having been written and directed by one person. Hence, it is likely that the scripting did not have the privilege of  external opinion and constructive criticism. Similar screenplay flaws are faced by Chinaza Onuzo’s Perfect Arrangement and Asuelime Ojie Eniola’s City Hustlers.

The story in Set Up 2 has potentials, and with good directing, it could be a bestseller. However, it does too little to save itself. The addition of the “Arthur-Vindex” logic in the movie comes a little too late. In the cemetery, when Lota says, “the  time of Arthur has passed, we need Vindex.” Perhaps, she is referring to Arthur Prior, who believed that logic is about reality rather than language, and Vindex, who launched a propaganda campaign portraying him as the saviour of the Roman world. Again, this logic can be mistaken for that from “The Crucible,” Arthur Miller’s play from 1953, later adapted to screen in 1996. Although the story represents Miller’s idea of immorality, injustice, and inequality, the application of its logic is hilarious and unfit for the scene in the play.

Set Up 2 does little to nothing about suspense. It is predictable, except for Grace’s death—which is way too easy—caused by her rather amateurish move. Even in the hospital scene, when the monitors beep, showing she is dead, the reactions come a little too fast — from Dimeji taking off his glasses to Chike’s gasp — as if they expected it. Besides being disjointed, some scenes are unjustified, just as the roles of some cast members — Lota Chukwu and Chris Attoh — are never defined. 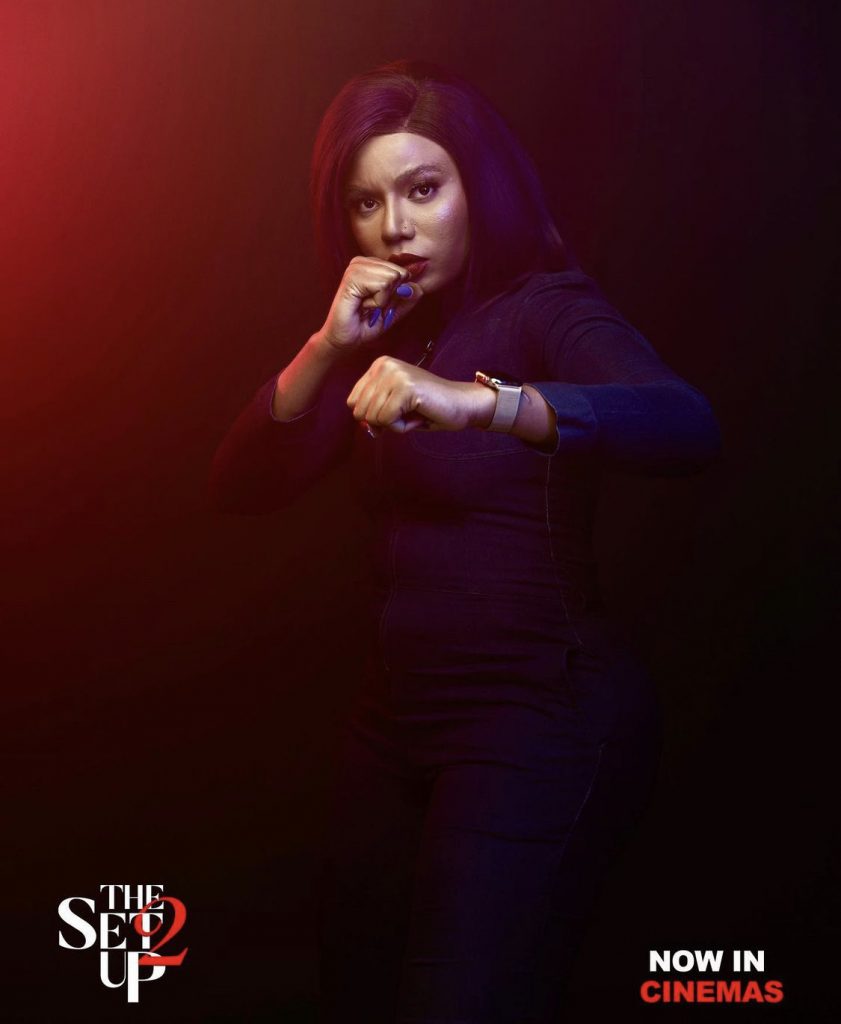 Also, there is no attention to the artistic verisimilitude of most scenarios. The Nigerian Correctional Service (NCoS) is known to be tight-ended in the country. Therefore, the assumption that a group can sneak in, break out, and have a face-off without being caught or confronted is rather unsettling and demeaning to the system. Even worse, the assumption that Nigerian nationals banned from the country can come in unnoticed does not paint a good picture, either.

Still, for all its ambition, Set Up 2 falls short. It could have been a good movie, but it focuses rather too much on aesthetics than on depth and clarity.