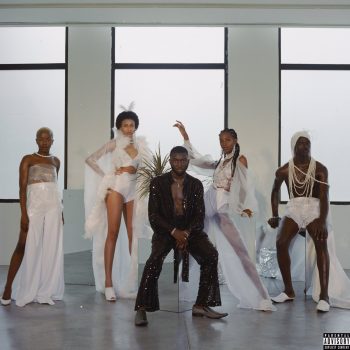 It has been hailed by some as the golden age of (popular) music and indeed pop-culture (debatable, of course), and with good reason: the 1980s are remembered as the decade in which MTV was born, Sting danced around a hundred candles while the rest of The Police lent instrumentals to “Wrapped Around Your Finger”, Maurice White led Earth, Wind & Fire to turn on the funk with tunes like “Let’s Groove” and “September’, groupies couldn’t get enough of Rick James, and Chuck D brought the noise. Trousers with wide bottoms were a thing, as were the huge Afros, and the years are frequently regarded with a sense of nostalgia, but not many would dare to conceive an idea that involves churning out a full-length body of work with “Retro” written all over it.

Those who only noticed Odunsi the Engine after his appearance on MI Abaga’s “Lekki” or his hook on “+-” from the Yxng Dxnzl album, it has to be said, are pretty late to the party. The blonde-haired singer, songwriter, and producer is well known and loved in Nigeria’s alternative music scene, a gradually expanding artistic circle that includes Ruby Gyang, Nathmac, Isaac Geralds, Maka Koles, Zainab Sule and Tomi Owo. You could also bump into him sipping from red cups in the company of Ajebutter22, BOJ, and the Show Dem Camp duo, all ambassadors of the unofficial vibey sub-genre known as Palm Wine Music. Rare, a 14-track album, is Odunsi’s second body of work after  2016’s eight-track EP Time Of Our Lives. With an aggregate listening time of barely 40 minutes, the record chronicles the emotions that are likely to be experienced by any millennial striving to stay head above water in the unforgiving, coy, indifferent city that is Lagos, a lyrical journey narrated with the musical flavour that characterised the 80s and early 90s. The title track, “Rare”, has Odunsi screaming “it’s my time, and nobody can tell me nothing” over keyboards that draw influence from old negro spiritual, “Fallin” is a tribute to (the defunct) P-Square’s “Ifunanya” but from the perspective of Prince, “Express” is a ride with friends through Lekki accompanied by Nasty C and frequent collaborator Santi, “Divine” is a groovy tune that has Davido hand in what is probably his best (non-commercial) verse on any track, and “Outcast” is a ballad about being different. “Wanted You” as well as “Green Light” are drum-heavy odes to love interests, Tay Iwar lending his vocals in the latter. Odunsi gets the assistance of Runtown on “Star Signs”, though you can’t help but wonder what parts of Lagos you’re likely to find ladies who are moved when Pisces and Taurus are inserted into pickup lines.

“Hectic”, which really has to do with pining for an ex-lover, begins with a sound similar to the opening sequence of Frank Ocean’s “We All Try” before Amarae, 234Jaydaa and Solis join in with vocals that would cause Macy Gray to nod in admiration. “Alte Cruise” is a high-five to sexual liberty and fast-paced Lagos living amplified by Zamir and Santi (again). There is an earnest admittance to searching for love in “Take Me There”, and “Take A Break” explores the pressure that comes with trying to get by while failing miserably at keeping in touch with close relatives: if you have ever had your mother complain about refusing to call or reply texts and being emotionally distant, this track will hit a nerve.

Without trying too hard, Odunsi takes listeners on a journey through older sounds, and the vibe is heavily nostalgic, with a little bit of New Edition, Prince, Sade Adu and Boyz II Men all finding room here. The sound mixing sometimes drowns Odunsi ‘s voice, but he is a strong singer, and his vocal projections won’t be denied. The lyrics flirt with repetitiveness too, but the rich musicality more than makes up for that.

Rare does not come with tracks that would receive much airplay in the country’s nightclubs, or that are likely to break into the regular countdowns, but it’s an album that is sure to provide good company on a Friday evening when you’re driving along the Lekki-Epe expressway, with an artsy lady with dark lipstick and kinky locks in the passenger seat, while the rest of the squad are trying out marijuana at the back. These songs add up to more than merely bringing back the decade that blessed us with “Purple Rain”, they illustrate how life plays out in West Africa’s busiest city. The guys at Smooth FM 98.1 no longer have to rely solely on foreign tracks for their softer 10pm playlists, they have Odunsi now.