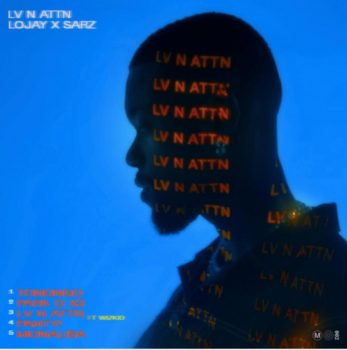 I had never heard of any artist called Lojay until I listened to the track “Tonongo”. According to internet records, he professionally started music in 2016 at the age of 20, so I took the liberty of going through his discography. On Apple Music, about 90% of his tracks have stars in front of them. This indicated that it was popular among folks and thoroughly enjoyed. Even in 2016, when he was still experimenting with different sounds and genres; like Fuji infused with pop. How did people sleep on this guy?

In a video on Lojay’s Instagram account, Sarz says, “His sound is very unique. It doesn’t sound like anything you’ve heard before. It’s Afrobeats with a twist.”

I wholeheartedly agree. It’s obvious that he has gone through immense growth since his early tracks, and who best to showcase that growth with than Sarz?

Sarz, on the other hand, is not new to collaborative projects. He did it with WurlD in 2019 on the well-received EP I Love Girls With Trobul. But why would one of the most successful producers on the continent be interested in working with someone who is relatively unknown? I remember the first time I listened to “Tonongo”. I was listening to Cuppy’s podcast on Apple Music and it was one of the songs on her playlist. My mind was instantly blown away, and rightly. I’ve played it every day since.

“Tonongo” easily holds a position in the Top 10 list of songs released so far in 2021. On his YouTube, Lojay says the song was inspired by a dancer he watched while in a popular strip club in Lagos. According to him, the way she did her thing held him captive. He attests to this in the first few lines of the song, “champagne stripper, real gold digger/She need mullah, big bag biller/waist on wicked, laps grown thicker (oh my God)”. He continues with the lyrics “you win the ass cheek Ballon d’Or, put all your soul into it/You make the thing go tonongo.” He created a tune that was sensual in rhythm without necessarily using explicit words, similar to the execution of Fireboy DML’s “Tattoo”. If a DJ played “Tonongo” in a nightclub today, 90% of the crowd would immediately vibe to it and start singing along. You might not hear the lisp when he’s singing, but it’s evident in his talking voice. This “impairment” adds an erotic tinge to his pronunciations without him trying too hard. It’s been stated in social media discourse that Lojay’s voice inflection makes the Yoruba language sound really sexy on his tongue, and this is evident in “Park Ox3”.  On the track, he confesses that he’s romantically and sexually attracted to this sexy woman, and he “seeks permission to throw her down”. He easily explores the concept of consent without making it unpalatable, crooning in the lines of “tell me your decision, mami/me I get a mission...” It makes it more enjoyable, and as usual, Sarz does a madness.

The entry into “LV N ATTN” is smooth, and it’s the only track with a feature. In the video making rounds on social media, Sarz surprises Lojay with the star feature, Wizkid, and Lojay’s reaction when he hears it is so wholesome. Wizkid assists Lojay in delivering a hanger that’ll definitely last on the charts for weeks. When Wizkid stamps his signature sound on the track with the line, “figure 8 no be 9 ting,” it’s not hard to tell that crowds would go wild if the song gets played at future concerts.

The songwriting on “Panty!” is limited, but catchy lyrics like “baby commando, fire the missile/carry the sentencing te ba ti binu” amidst a melodious hook are sure to draw you in. The track is also painfully short, so you want to listen to it at least thrice before moving on to the next song. He exalts the female anatomy in its almost unclad state.

The EP closes out with “Monalisa”, a sonic blend of Afrobeats and Dancehall, which is designed to become a fan favourite. Lines like “girl, I’ll be foolish if I don’t let you indulge me/your lips like poison…” are a testimony to his cleverness.

With a running time of 14 minutes, LV N ATTN is the most cohesive EP I’ve heard in a while, and Lojay showcases his unique vocal capability and unreal songwriting skills on this one. It’s explosive, and it’s worthy of multiple listens.