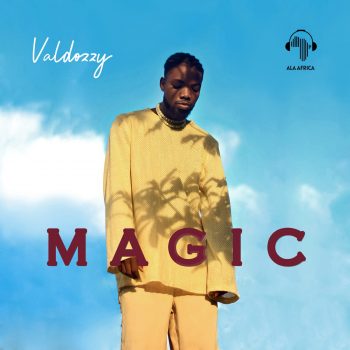 The very first impression that the songs of a new singer make on listeners is often indicative of how talented (or otherwise) he is. Valdozzy, whose music is a skillful fusion of melody and soul, is one crooner whose ability is evident from the first note. Born in 1994, Valdozzy whose real name is Valentine Nnadozie Ukwu, is an Afrobeats artiste signed to Ala Africa Music. Valdozzy, who holds a bachelor’s degree in Fine Arts from the University of Nigeria, Nsukka, is not just a talented singer, but he has also put in the work in his craft. It is difficult to make good music on slow beats, but Valdozzy does so with ease, in addition to his fine bridges which are the most remarkable aspect of his music. He also strives to tell stories that embody his not-so-easy journey of becoming an artist.

His debut body of work, Magic, is a six-track EP that dwells on the themes of lust, romance, and ambition. The project which was mastered, mixed and produced by Nani premiered on Friday, 4th June 2021. The first song on the record, “Black Sheep“, tells the story of the young Valdozzy facing opposition from his close circles. The lyricism employs the use of internal dialogue. He sings, “I have a lot of b***s*** to deal with/ like chasing all my dreams/ got me hard on my folks/ like a black sheep I’m ruining/ I’m ruining things/ but who will I be if I no chase me…” This is suggestive of the story which is not peculiar to just Valdozzy, where artistes have had to go against the grain to pursue a career in music. The desire to create art breeds strong passion, and only through passion do artists really go out of their way to create something which they believe in, even in the face of doubt expressed by friends and family.

In the second song titled, “Aye” accompanied by drums, in a gyration and ascendant style, Valdozzy croons, “leave me alone,/ make I chase my goals/ as I want am so…” Here the singing is not just beautiful, but it runs with a catchy refrain, which amplifies the tension of facing a dream which might seem unusual to family members or friends in a society like one where Valdozzy plies his trade.

The struggles which Valdozzy expresses in this EP are as personal as they are as relatable, and on the EP’s final track, “Man No Go Fall”, he sings of his internal distractions and turmoil, while expressing his resolve to stay afloat.

Valdozzy’s music is sensual, thoughtful, and rhythmic. At the very least, the tracks draw you in and cause you to empathise with him on his journey to fulfill his dreams and give his craft full expression. As a new artist, he is not fully made yet, but the potential is difficult to ignore.  With a unique sound, talent and passion, Valdozzy has all the makings of a future world-beater. I recommend that he does more love songs, and that he experiments with reggae sounds more often as he did with “Aye.” It would also be nice to see this new exciting artist do some collaboration with some powerhouses in the industry like Flavour N’abania and Omah Lay, the latter with whom his sound shares a few similarities. He is a gem waiting to be fully unearthed.

Michael Chiedoziem Chukwudera is a writer and freelance journalist. His works have been published in Jalada Africa, Praxis Magazine, African Writer, The Lagos Review, and Fortunate Traveller, among others. He lives in Nigeria’s South-South region.