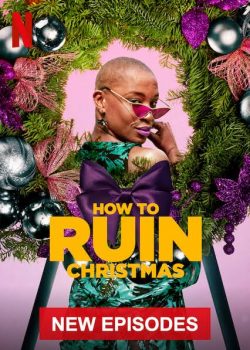 Whose Funeral Is It? A Review of “How To Ruin Christmas” Season 2: “The Funeral”

This is where “The Funeral” shines brightest: in the subtle but clear evidence of growth that it portrays. Plus, it is just as dramatic but with a little more depth and less chaos than the first season, and it comes with its own underexplored…

It’s another Christmas, and the Sellos and Twalas are at it again. Brought to viewers by Netflix and the Ramaphakela siblings, the two South African families of How to Ruin Christmas are incapable of running out of family drama. The first season, which I reviewed, was tagged “The Wedding” and centred on the wedding that brought these two families together as well as Tumi Sello’s (Busisiwe Lurayi) havoc-wreaking pattern that all but ruined both Christmas and the wedding. This season, titled “How to Ruin Christmas: The Funeral,” centres on a funeral, and Tumi’s havoc-wreaking pattern that threatens, yet again, to ruin both Christmas and the funeral.

This time around, Gogo Twala (Nandi Nyembe), the Twala grandmother, is the real catalyst behind most of the drama that plays out over the course of the four episodes of the season. Gogo has always been presented as a strong woman, or at least a woman who likes to put up a strong front. So when she gets diagnosed with cancer, it is no surprise that she would fight to exit on her own terms, in every sense of the phrase. Rather than stay cooped up indoors with a nurse constantly hovering around her, Gogo wants to literally go out and have fun before she runs out of time. Her family will never allow it. But she knows she can rely on Tumi, ever the rebel, to make it happen.

Tumi reluctantly agrees to help Gogo get away from home. What she does not expect is the elderly woman passing on before they return home, after making Tumi promise to deliver a letter to one Richard Bab’Mkhize (Owen Sejake) in Durban. Once again, Tumi has ruined Christmas before the holiday even starts.

Now, instead of a wedding anniversary, the family has to perform a funeral during Christmas. Expectedly, Tumi gets forbidden from being anywhere around the funeral and the Twala family. But she can’t leave it alone. To fulfil Gogo’s last wishes, she must ignore every other person’s wishes, leaving a trail of damages behind.

In “The Funeral,” everything is the same at its core. Tumi is still “a walking list of fuck-ups.” Her sister, Beauty Sello-Twala (Thando Thabethe), still has daddy issues. Their mother, Dineo Sello (Clementine Mosimane), has not stopped being an overzealous Christian who keeps unsavoury secrets. Minister Vuzi Twala (Saint Seseli) has not grown out of his obsession with his ministerial position. Valencia Twala (Charmaine Mtinta), the resident drama queen, can’t help but be a thorn in everyone’s flesh. Beauty’s husband, Sbu Twala (Sandile Mahlangu), is still a ray of sunshine and one of few voices of reason, a silent observer with more maturity than anybody gives him credit for. And his older brother, Themba (Motlatsi Mafatshe), is still an overgrown Twala baby.

But many things have changed. The mystery that was dished out to us as a cliffhanger at the end of the last season has changed the dynamic between Tumi and Khaya (Yonda Thomas), her best friend/boyfriend, with whom she’s still very much in love. Tumi and her mother now have a more affectionate relationship. Beauty and Sbu have suffered a devastating loss and are going through a very difficult time. Beauty’s deadbeat father, Edmund (Seputla Sebogodi), is taking advantage of his daughter’s vulnerable state to con his way back into the family he abandoned now that Beauty appears to be married into money. Themba and his wife Lydia (Swankie Mafoko) frame conversations around their feelings, and even though we are not told, it is safe to assume that they have been getting therapy. And Minister Twala has replaced his obsession for camera crews with an obsession for budget.

With the South African Revenue Service (SARS) hot on his heels, the minister is now broke and cannot afford his mother’s funeral. But his wife, Valencia, cannot afford for anyone to know about their new financial status. Plus his brother Siya (Trevor Gumbi) and his Aunt Prudence (Thembi Nyandeni) are making plans for an expensive funeral that they have no plans to pay for.

Of course, Tumi is very much the root of most problems. If she had just refused to take Gogo out, although she must be given credit for the fact that her actions were actually selfless this time, Gogo might not have died and the Twalas might not have had to incur funeral costs during Christmas. But this time, Tumi mostly takes a back seat— she is literally missing half of the time, with an entire episode titled “Where is Tumi?” Yet, even in her absence, family drama is still in full swing, mostly on the Twala side. And funeral costs make the loudest noise.

In “The Wedding,” it was abundantly clear that Beauty and Sbu had very little control over their own wedding, an issue that often arises in many African cultures. In “The Funeral,” a similar issue is raised: How much control does the deceased have over their own funeral? From funeral arrangements to matters of inheritance, many parts of Africa prioritise culture and family over the wishes of the deceased. Additionally, families often find themselves spending excessively on funerals, whether the deceased would have wanted an expensive funeral or not. It is sometimes said, even, that the money spent on a funeral might surpass the money that the deceased ever had the fortune of spending in their lifetime. In the second season, the series makes a case for the dead, their wishes and less expensive funerals.

Before she passes on, Gogo Twala makes her wishes clear. She has penned a letter to Richard, a man who is not a member of her family, and she has handed said letter over to Tumi, a woman who is also not a member of her family. The letter contains her final words, as well as her intentions and preferences for her funeral. But her family does not so much as entertain the letter. It is left for two outsiders to fight for her while her two sons continuously fight over the cultural responsibilities and privileges that come with traditional funeral rites to the extent that they even fight over the casket with Siya publicly declaring, “It’s my funeral.” It certainly does not help that Gogo asked for a funeral that her family, specifically her sister Prudence, considers “un-African.”

Gogo does not even want a burial, let alone a lavish one. But her family cannot imagine anything less than a lavish burial. The only reason the minister and his wife are attempting to cut costs is that they actually do not have the money for the kind of ceremony they truly want.

While we watch them hide their newfound “poverty” from everyone, including their adult sons, an unknowing Beauty asks Sbu a fundamental question: “Ever wonder why people spend so much money on the dead?” And when Prudence asks who will cook for the guests, Valencia responds, “We’re the ones in mourning. They must come from their homes already fed.” Of course, this is unlike Valencia and she is only saying that as a convenient cover for her family’s financial situation, but her sentiments are likely shared by many viewers. Why should people in mourning have to spend so much to feed guests?

It takes all four episodes for Gogo’s family to accept her dying wishes, and they are ultimately better off for it. Thankfully, the length of time it takes gives this season enough space for the stories to arc and to provide some deeply satisfying scenes where the conflicts climax, from Twala wives standing up to in-laws to Twala sons having very necessary outbursts. In these and a few other scenes, we get to really see some growth in the characters, including Tumi who still ruins Christmas but also helps fix it this time. This is where “The Funeral” shines brightest: in the subtle but clear evidence of growth that it portrays. Plus, it is just as dramatic but with a little more depth and less chaos than the first season, and it comes with its own underexplored scandal, too.

But the second season is also less fun to watch. There are several genuinely funny moments, and it is especially a lot of fun to watch and laugh along with the Twala daughters-in law as Prudence makes Valencia squirm and feel small. But as a whole, the comedy in this season is less organic. The season even takes a problematic approach to comedy in two disturbing scenes, at least, where Valencia literally manhandles the manhoods of the men in her life in a bid to emasculate them.

As a side note, it is nice to see again the sheep called Succulent, after escaping being butchered last season. It would also have been nice to see more of Tumi and Khaya’s relationship than was shown. The couple might not be the calm in the storm like Sbu and Beauty were in the first season, but they bring a level of balance that is satisfying. Tumi is still a trouble magnet and Khaya does not always know how to be there for her, but they balance each other out, imperfections included. And in the midst of relative chaos, they are a cute distraction.

In the final analysis, How to Ruin Christmas: The Funeral does not outdo its predecessor, not even in non-screenplay related filmmaking elements. Lance Gewer’s cinematography it top-notch, but it was top-notch before. The soundtrack of the last season was much more enjoyable. Even the wardrobe was catchier. But “The Funeral” definitely holds its own. And there is every reason to hope and believe that it will be renewed for a third season of Christmas drama.

How to Ruin Christmas: the Funeral netflix Vivian Nneka Nwajiaku