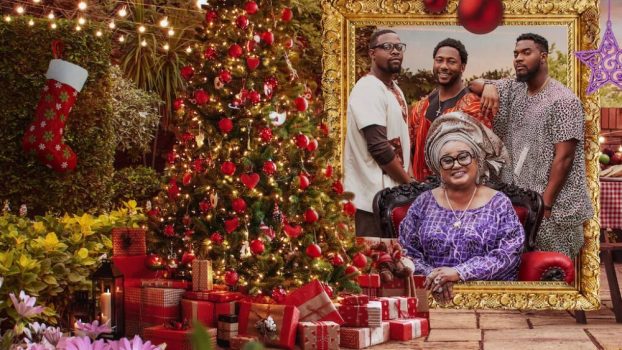 Netflix’s first Nigerian holiday movie is a typical “Nollywood for global audiences” movie, working very hard to be Nigerian but with western appeal. How you feel about the movie ultimately depends on how you feel about Nigerian products that feel foreign. But if you somehow successfully put those feelings aside, A Naija Christmas, directed by award-winning filmmaker, Kunle Afolayan (The Figurine, Phone Swap, October 1, Swallow, and written by award-winning screenwriter, Kemi Adesoye (The Figurine, Phone Swap), is mostly a delightful, albeit unsatisfactory watch.

Like many holiday movies, A Naija Christmas doubles as a romantic comedy. So from the get-go, as is usual with holiday movies and romcoms, the movie relies on certain tropes. The premise itself is simple and familiar. A mother, Madam Agatha (played by Rachel Oniga in one of her last roles before her passing earlier in the year) is mocked at a meeting of her women’s group for her lack of grandchildren. At the same time, her second son and, perhaps, the only son she has any hope for, Obi (Efa Iwara), is becoming a hash-tag after a very strange and embarrassing proposal to his girlfriend, Vera (Linda Osifo).

Madam Agatha’s heart cannot take it anymore, so she all but gives her three sons an ultimatum and an incentive: the first son of hers to bring home a wife — “a good girl,” to be specific — by Christmas, will inherit the family house which the eldest son would, ordinarily, be entitled to. This sets off a fierce competition between Ugo (Kunle Remi), the eldest, and his brother Obi.

Ugo is the formulaic casanova type, literally repeating the same lines to as many women as possible and swearing that his womanising lifestyle is behind him. Of course, the movie pairs him with the celibate and religious Ajike (Segilola Ogidan) who will finally “change him.” In Obi’s case, the pairing is made in romcom-heaven: his perfect match is his best friend (Ade Laoye) who hangs in the background as a support system while he obsesses over a woman (Osifo) who is incapable of loving him back. Other than Chike (Abayomi Alvin), the youngest son who is oddly uninterested in the inheritance or the “quest to find a woman” and is later revealed to be in a secret and scandalous relationship, the plot and characters are definitively cliché.

Frankly, cliché is not always bad. Movies like Fine Wine have proved that being cliché can be a great technique. But although the tropes are not poorly utilised, A Naija Christmas brings nothing cute to the romance table, and the only thing new about the movie is its Nigerianness which, thankfully, it portrays in a manner that is never overdone.

Essentially, the movie is only original in its outlook. There is that awareness as you watch it that this is a story you have seen several times, but something about it just looks different. Maybe it is its Netflix-backed budget. Or maybe it is the fact that many of its tropes feel like they are straight out of a Hollywood movie, from friendship bracelets to a Christmas tree lighting, to a drunk woman grabbing the microphone at a club, to a loan shark (Lateef Adedimeji) continuously breaking into his debtor’s home and forcefully obtaining collateral (although those hilarious Adedimeji scenes are some of the most refreshing, albeit weirdest parts of the movie).

At least, A Naija Christmas is not too Christmassy for a Nigerian Christmas. And it must be given credit for how it basks in our Nigerian colourfulness (Mercy Johnson-Okojie as Mrs Bliss literally wears a rainbow coloured outfit on one occasion), how its subplot featuring a Christmas gala in Mushin exposes, although inadequately, class divides between the upper-middle class, and “the ghetto”, and how it plays to both religious and musical sentiments. It is hard not to sing along and move your body during that praise and worship church scene, or when a Fuji number by a famous real-life musician replaces a Christmas carol.

The movie also deserves praise for its editing and cinematography, especially the latter. In one scene where cinematographer, Jonathan Kovel really shows himself, Adedimeji’s character, Tony Torpedo, has just seized yet another set of valuables from Ugo as collateral for his debt. An injured and desolate Ugo is nestled against the feet of a couch tended to by Ajike, just before he returns to his casanova script. At this point, Ugo truly feels devoid of control for the first time in the movie. Here, Kovel favours an overhead shot that vividly captures Ugo’s studio, turned upside down, in complete disarray and dimly lit only by a fancy floor lamp, as vulnerable as the character himself.

However, where the movie finds the most comfort is in its comic factor. Even though it sometimes goes for overkill, and the comedy occasionally borders on the ridiculous, the jokes, mockery, banter and general humour often work very well, most of them thriving on relatability. But it is almost as if comedy is the only thing the story is truly able to offer, because it prioritises comedy over everything else and under-develops every serious theme it attempts to explore. Although this is not his first romantic comedy, Afolayan is known for serious-minded films — stories that have depth — and while it is interesting to see him return to lighter cinematic genres, it is confusing and a tad painful to see one of his movies struggle and fail to find depth.

This movie is a literal it’s never that deep. The pressure and pride Ugo bears as a first son is reduced to a mere defence or attack technique, and is overshadowed by comedy. Obi finds himself at an emotional crossroads where he has to choose between the woman he has always wanted, and the woman he knows he is better off with; but instead of being given space to really figure it out and reach a moment of clarity, he is given a dramatic scene where he throws a split-second decision at one of the women (and us) in the same way that the screenplay throws it at him.

Chike, the most frustratingly underdeveloped of the major characters, jumps from being in a forbidden type of love with a person who cannot and will not choose him, to bringing home a woman out of nowhere, without a moment to breathe and truly feel what appears to be a genuine loss. The highly-principled Ajike lets herself get a little too loose for her own comfort but never considers the implications, merely treating her actions as a joke. And even the parallel story of taking Christmas to “the ghetto” feels superficial and unsure.
But A Naija Christmas is a decent project— a very enjoyable upbeat movie that is full of life and with a near-assurance of a good time. And if you learn nothing new in its two-hour running time, you can at least pick up this durable bit of relationship wisdom: “If you must fall, clear ground first.”