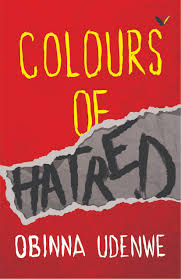 Book Review: In “Colours Of Hatred”, Obinna Udenwe Bridges The Gap Between The Literary And Detective Forms Of Novel Writing

Sometimes a book partly introduces itself in the beginning, leaves out certain curious details about why it is what it is, and then takes you on a narrative journey.

Obinna Udenwe’s second novel, Colors of Hatred, published in 2020 by the Regium imprint of Parresia publishers, is one such body of work. 324 pages long, the book is divided into three sections and is set in the cities of Khartoum, Enugu, Lagos, Abakaliki, and Abuja. Colors of Hatred is about a young woman who narrates her coming-of-age story that sets her on a path she would ultimately regret treading. The book begins with a prologue where Leona, the protagonist of the novel, is on her deathbed, confessing to a Catholic priest for the first time in eighteen years. She confesses to committing “the sin of beauty”, a curious thing that is not demystified in the prologue before the novel begins. When an author begins a novel in this way, the onus is on him to hold the reader’s attention to the end. To do this, he requires dexterity, and he has to be able to keep the reader glued to the book’s pages.

The writing in Colours of Hatred shows an awareness of this. It is written in the style of a detective novel, first arousing curiosity and managing to sustain that curiosity to the novel’s very last paragraph. The narrative hits the ground running from the first chapter, where the protagonist travels to meet her father, who tells her something which changes the course of her life.

The backstories in the novel can be divided into three periods: the happy days that went sour in Sudan, leading to her family’s exit from the country after her grandfather was murdered right in front of her; the days of sadness in Enugu, where they relive the trauma occasioned by their exit from Sudan; and the period that marks the beginning of the book, where Leona sets out for revenge.

In Sudan, Leona’s grandfather, a big army officer, betrays his people and goes into hiding but he is eventually killed; his murder throws his family into turmoil. Years later in Nigeria, Leona’s father embezzles money and is imprisoned. In the light of this, for much of the book, Leona’s life is overshadowed by the trauma occasioned by the actions of her forebears and the consequences of said actions. Her memories are also haunted by the life of her mother, whose story is one of the book’s big tragedies. In all of these intricacies, the book explores the themes of conflict – with a significant focus on the Sudanese Civil War and the Nigerian Civil War – family dysfunction, and revenge.

Udenwe’s writing is descriptive, and his characters are well-formed. The story is paced like a well-woven detective novel, with its plot unraveling layer by layer until the eventual plot twist, which throws the reader off-balance and reveals who (and what) the actual villain is.

The book does very well with characterisation, too.  For a novel of this nature, most writers would opt for a plot-driven story, but Udenwe’s narrative rides purely on the backs of the characters.

However, the flow of the dialogue in this novel leaves much to be desired. There are certain points where the dialogue feels forced, as though the writer was trying too hard to make those moments thrilling; some of the discussions between James and Leona felt that way, especially at the points where he tried to convince her to take on his vengeful mission against his arch-rival, Chief Fegun Wale. Also, the conversations between Leona and Akinola, particularly where they tried to get acquainted with each other, come off as a bit too cheesy.

Colors of Hatred is a didactic book in the tradition of a great African novel like Alan Paton’s Cry the Beloved Country, and would also fit perfectly in the same library section as Chigozie Obioma’s The Fishermen. The book is instructive of the dangers of vengefulness, with a concluding act that illustrates how the quest for vengeance consumes the soul. It does this with descriptive and picturesque, character-driven prose which bridges the gap between the literary and detective forms of novel writing. Udenwe has come a long way from Holy Sex and Satans & Shaitans. The title of the book, Colours of Hatred, also makes for thematic reflection. It is metaphorical, and in this book, the real meaning of Colour as a shade of life interpolates with the concept of Hatred, one of the strongest human emotions. The book depicts Hatred as the failure to look at the different shades of a thing. This echoes Graham Greene’s famous line, “Hate is a failure of imagination”, from his classic mystery novel, The Human Condition.

There are three main reasons to appreciate Udenwe’s efforts in this book: the good writing, the attention to detail in characterisation, and the lessons drawn from the themes espoused. The book deserves to be celebrated for all of these.

Michael Chiedoziem Chukwudera is a writer and freelance journalist. You can reach him at chukwuderamichael@gmail.com.