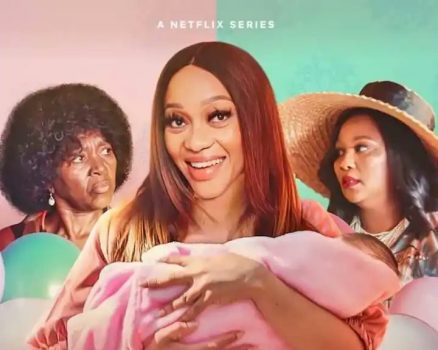 “How to Ruin Christmas: The Baby Shower” Series Review: Third Season Has Same Formula, More Drama, and a Tumi-Sized Hole

After owning the show for two seasons straight, it’s impossible not to feel Tumi’s absence. Still, it turns out that the holidays can be a beautiful, chaotic mess without the family’s problem child…

The first episode of the third season of How to Ruin Christmas opens with a literal house on fire. The Sellos and the Twalas stand and watch, with a lot of tears and regret around. At least two people ask themselves, “What have I done?” It’s a cold open and also a flashforward into what would eventually happen by the end of the episode, both of which are usual for the show, created by the Ramaphakela siblings for Netflix. What stands out in the opening scene of this season, titled How to Ruin Christmas: The Baby Shower, is that Tumi is conspicuously missing. The next scene brings us into the present, twelve hours before the fire. Beauty Sello-Twala (Thando Thabethe) is pregnant and breathing hard through a birthing class with her husband, Sbu Twala (Sandile Mahlangu). Then, she quits suddenly and begins to lament about not wanting their families to be together this Christmas. As she walks out, Sbu calls after her, “Tumi’s not here this year, what could go wrong?” We already know what we’re getting from the beginning: the same formula, more drama, and a Tumi-sized hole.

Played by Busisiwe Lurayi, Tumi Sello practically carried the show in the first season, The Wedding, where the Sello and Twala families got joined together by the marriage of Beauty and Sbu. In The Funeral, Tumi was less present and less problematic, but her impact still reverberated across the season. The last time we saw Lurayi as Tumi, she was jetting off to some happily ever after to spend time with “me, myself and I.” It seemed so final, raising questions as to whether she would return for subsequent seasons or not. Well, sadly not. In The Baby Shower, Beauty explains that Tumi went on a “solocation.” But beyond the screen, Lurayi’s absence has a more sombre implication. In sad, unexpected events, Lurayi passed away in June this year. However, while the actor’s death forecloses the possibility of her return to the show, Lurayi had earlier left How to Ruin Christmas to star in another series. Her character was going to be written out, either way. And after owning the show for two seasons straight, it’s impossible not to feel Tumi’s absence.

(Read also: Netflix Series: A Review of South Africa’s How to Ruin Christmas: The Wedding First Season on Netflix)

Still, it turns out that the holidays can be a beautiful, chaotic mess without the family’s problem child. In Tumi’s absence, How to Ruin Christmas continues to be hilarious and dramatic. There’s still a lot to enjoy as the Sellos and the Twalas return for the third Christmas in a row, this time to celebrate the coming of a new baby with a baby shower that the baby’s mother absolutely does not want. Considering everything that went down the last two Christmas holidays, Beauty doesn’t even want her family to be anywhere near Sbu’s family this Christmas. She just doesn’t need any unnecessary stress on top of her pregnancy, especially since she’s terrified of losing another baby after suffering a miscarriage earlier. It’s bad enough that she has to tolerate her drama queen of a mother-in-law, Valencia (Charmaine Mtinta); but it’s even worse that she also has to deal with the competition between Valencia and her own mother, Dineo (Clementine Mosimane), who is perpetually trying to keep up with the Twalas. Meanwhile, everybody else has their own problem, too. Sbu is worried about not being ready for fatherhood.  The older Twala son (Motlatsi Mafatshe) and his wife (Swankie Mafoko) are dealing with both their toddler and the insecurity of being ignored by the rest of the family. And there’s a new character named Zama (Denise Zimba-Schlichtig), a slay queen no less, blackmailing Vusi (Saint Seseli) with a secret that threatens his marriage.

In usual How to Ruin Christmas style, The Baby Shower emphasises the family’s inconsiderate need to control everything, regardless of the wishes of the people who will be affected the most by the family’s decisions. At first, Beauty does not want a baby shower, but the family throws one, anyway. Then, the shower results in Beauty running away from yet another family event and ends with one home going up in flames, forcing the Twalas and the Sellos to move in together for the holidays. But neither family learns any lesson. They move on to planning a surprise gender reveal party, even though they know that Beauty, still as superstitious as ever, believes it’s bad luck to know her baby’s gender until the birth.

(Read also: Whose Funeral Is It? A Review of How to Ruin Christmas Season 2: “The Funeral”)

Like the previous seasons, The Baby Shower delivers on unending family drama, chaos and everything in between. It’s just as melodramatic and, believe it or not, even more eventful than the seasons where Tumi wreaked havoc. But it does have a few quiet moments, even if we never get to sit with those moments for long enough. There’s a good deal of vulnerability on display, whether it’s when Vusi’s secret comes knocking at the Twala door, or in Sbu and Beauty’s combined angst over childbirth. It’s particularly interesting to watch Valencia humble herself before Dineo in a bid to hide a secret, and to watch their relationship change in the process.

But by the end of the three episodes that make up this season, there’s nothing very tangible to hold on to. And this is where Lurayi always saved the day. The madness and mayhem between the families are thoroughly entertaining while they last but easily forgotten after the credits roll. Tumi’s distinct role as the family rebel, and Lurayi’s embodiment of that character have always been the most memorable bits of the show. It doesn’t help that the dynamic between the Twalas and the Sellos has become repetitive and is getting stale and tired. And even with Zama’s solid introduction into the show, nobody can blame audiences — or critics — for finding it difficult or impossible to move on from a character as central to the show as Tumi was.

(Read also: Eleven Movies Coming to Your Screens This December and Beyond)

The Baby Shower ends on a note that feels somewhat final, as if the Rama siblings gave serious considerations to the possibility that the show might not go on. But, just in case, it throws in a lifeline — a second wedding to look forward to and a potential shake-up in the Sello-Twala dynamic. How to Ruin Christmas sure looks like it’s become a Christmas tradition, but whether it can survive post-Lurayi remains to be seen. Yet, there’s still hope for it. I, for one, hope it can forge a new path without Tumi. In the meantime, this wildly fun South African Netflix original has earned a fair chance.

(How to Ruin Christmas: The Baby Shower is streaming on Netflix here.)

How to Ruin Christmas: The Baby Shower