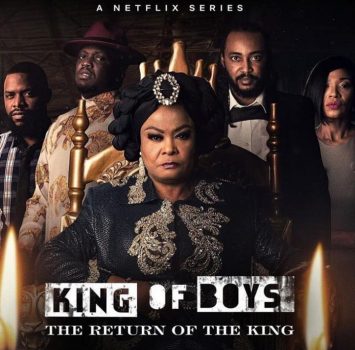 If you have been paying any attention to Nollywood or Netflix, or if you’ve just been minding your business but somehow found yourself scrolling through your social media feed, you have definitely noticed all the hype around Blood Sisters, the EbonyLife-Netflix limited series created by Temidayo Makanjuola, and directed by Biyi Bandele (Half of a Yellow Sun), and Kenneth Gyang (Òlòtūré, Confusion Na Wa). Since the crime thriller arrived on Netflix less than a week ago, it has been topping Twitter trends and Netflix charts. According to Mo Abudu, CEO of EbonyLife, Blood Sisters is top 10 in more than 20 countries, including the UK, US and France.

You’ve likely already binged the four-episode series, and if you’ve not, you’re probably planning to. Whichever side you fall on, it makes sense if you’re thirsty for more Nigerian crime thrillers. Afrocritik has got you covered, both now and in the nearest future. Here are four Nollywood crime thrillers that are currently streaming, and four that will soon hit the screens.

Before there was Blood Sisters, there was Kemi Adetiba’s King of Boys. Before King of Boys, crime thrillers had been making their way to Nigerian cinemas every now and then. But none had ever done it quite like the KOB franchise. The first installment, a crime and political thriller film which premiered in cinemas in August, 2021, follows Alhaja Eniola Salami (Sola Sobowale), a businesswoman, entrepreneur and boss of the Lagos underworld as her political ambitions and struggle for power threatens everything that she loves. King of Boys was so successful that it is currently the sixth highest grossing movie of all time in Nigeria. For their roles in the film, Sobowale and Adesua Etomi-Wellington won the Africa Movie Academy Awards (AMAA) for Best Actress in a Leading Role, and Best Actress in a Supporting Role respectively.

Then, a sequel was made in the form of a 2021 Netflix series titled King of Boys: The Return of the King. That, too, was a huge success, reaching top ten on Netflix in several countries. Blood Sisters might have surpassed KOB in terms of patronage, but KOB certainly holds a special place in the history of Nigerian cinema—and in the hearts of countless Nigerians. The film is streaming here on Netflix, and the series is available here.

Three best friends navigate life in Isale Eko in Gangs of Lagos, produced by Kemi Lala Akindoju and inspired by real life characters. Not much is known about the plot of the movie, but it seems clear enough that it will include gang wars. Sugar Rush producer, Jade Osiberu, directs this action thriller starring Adesua Etomi-Wellington, Tobi Bakre and Chike. The movie also features the Ikorodu Bois, and Pasuma. Announced in 2021, Gangs of Lagos is expected before 2022 runs out, but no release date has been publicised yet.

An early collaboration between Netflix and EbonyLife, Òlòtūré started streaming in October, 2020 after premiering a year earlier at the Carthage Film Festival, Tunisia. It was directed by Kenneth Gyang, one of the two directors of Blood Sisters, and (fun fact) has a cliffhanger ending like the Netflix series. Partly based on a Premium Times’ report, the film follows the titular character, a journalist (played by Sharon Ooja), as she goes undercover to expose human trafficking in Nigeria. It is much more tragic and less dramatic than Blood Sisters, but it is definitely worth your time. Òlòtūré is streaming here.

Described as a noir crime thriller, Jolly Roger is an upcoming feature film directed by Walter Taylaur (Gbomo Gbomo Express, Catch.er). Daniel Etim-Effiong, who plays the role of Akin in Blood Sisters, stars as the lead in Jolly Roger where his character’s life starts to fall apart after an encounter with lawless police officers. Also featuring in this film are Deyemi Okanlawon (who plays Kola, the abusive fiancé who gets killed, in Blood Sisters) and Toni Tones (who plays the younger version of Eniola Salami in the King of Boys franchise).

No release date has been announced yet, but after its premiere at the Nollywood Week Film Festival this week, we can expect the film to come soon enough.

Nearly a decade since it was released in cinemas on the 1st of October, 2014, it will always be relevant in any conversation on crime thrillers in Nigeria. Directed by renowned Nigerian filmmaker, Kunle Afolayan (Citation, Swallow), October 1 is set against the historical backdrop of Nigeria’s independence from Britain. As the country celebrates and prepares for the monumental occasion, the people of a remote town find themselves living in fear with a serial killer attacking its women. Police Inspector, Danladi Waziri (the late Sadiq Daba) is called in by the authorities to find the killer and put a stop to the killings. Kehinde Bankole plays a fundamental role in this movie, and if you’ve seen her name trending recently, it’s because of her deliciously villainous role as Olayinka in Blood Sisters.

October 1 earned several nominations and awards, and Daba won the AMAA for Best Actor for his role in the film. October 1 is available to stream here on Netflix.

Ugandan filmmaker, Loukman Ali, (The Girl in the Yellow Jumper) directs this upcoming Jade Osiberu-produced Nollywood crime thriller featuring a cast that is as star-studded as Blood Sisters. The film is said to be about twin brothers who are on opposite sides of the law, and features Deyemi Okanlawon, Toni Tones and Tobi Bakre (along with at least four other Big Brother Naija alumni), amongst other celebrities. Brotherhood is set to premiere in cinemas on the 8th of July, 2022.

A 2016 heist film, Ojukokoro (the Yoruba word for “greed”) is a crime thriller and comedy directed by Dare Olaitan (Knockout Blessing, Dwindle). The story follows the broke manager of a shady petrol station (Charles Etubiebi) who decides to rob his employers but soon finds that he is not the only one with that intention. Wale Ojo, who played Inspector Joe, a.k.a. “Chicago” in Blood Sisters, plays a very different character in Ojukokoro, this time answering the name “Mad Dog Max.”

Ojukokoro: Greed screened at the 2016 Africa International Film Festival (AFRIFF) before its release in cinemas in March, 2017. You can find it here on Netflix.

Not very much is known about Shanty Town, but the crime thriller is directed by Dimeji Ajibola (Ratnik, Ovy’s Voice) and is said to be about three sex workers who are “brought together by circumstances beyond their control and must fight against overwhelming odds in a brutal world of crime, drugs, politics and power, in order for a chance to live freely or die trying.” It features big names like Chidi Mokeme and Shaffy Bello as well as King of Boys stars, Sola Sobowale, Richard Mofe-Damijo, and Nse Ikpe Etim. Nancy Isime (Blood Sister’s co-lead, “Kemi”) and Uche Jombo (who plays Sarah’s mother in Blood Sisters) also star.

Shanty Town is expected before the end of 2022, but no definite date has been announced.