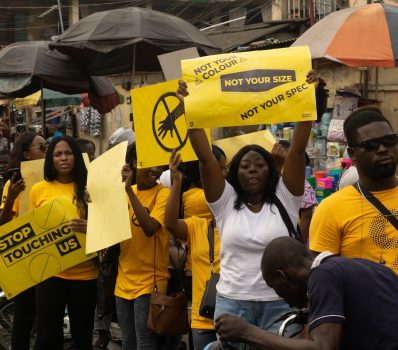 Feminism And Allyship In Nigeria: Here Is What You Should Know

Allyship involves amplifying, promoting, and supporting social justice, equality, and human rights for marginalized or oppressed groups by a person who is a member of another group that is not oppressed or marginalized. A feminist ally can simply be described as someone who supports feminism and women’s rights.

Feminism has witnessed multiple waves over the decades, but in recent times, more people have embraced the cause on a global scale. In Nigeria, however, a huge chunk of the population is still indifferent to the issue of gender equality. Gender equality in the country should not be endorsed only by women and nonbinary people. There is also a need for men to amplify the voices and objectives of feminists in the spaces they find themselves in, particularly when they find themselves around other men.

Poor and performative allyship can sabotage any movement. Allies should know to never talk over, centre themselves or be louder than the voices of the oppressed. In Nigeria, only a few feminist allies can attest to knowing their place and roles in the movements they claim to support. Those who seek to do better as allies need to start by listening to feminists as well as other male allies who are committed to advocating for equality in Nigeria.

Women have long been burdened with the expectation of educating other men and society, but it’s refreshing to see that, albeit slowly, some men are taking up the gauntlet to educate their fellow men on the need to work towards gender equality. Allyship is not a coat you only wear in cold weather. It is necessary to be intentional about allyship in a manner that not only amplifies the voices of the marginalized, but also teaches men to not become an obstruction to the progress of the feminist movement. In any case, what is imperative for men is to become allies of women in their fight for equality, to quote the Indian poet Avijeet Das.

In exploring the concept of allyship in feminism, Afrocritik spoke to three male allies to draw some perspective on the knowledge gap that exists in understanding feminism, and how (Nigerian) men need to do a lot better.

Ayo Sogunro is a 36-year-old human rights lawyer, writer, and social critic. Known for his work in social advocacy, he has always been opposed to class and social inequality as a teenager. For Ayo, allyship is about using one’s privileges, resources, and skills to raise public awareness and help develop social consciousness on issues affecting a vulnerable or marginalized community but without overshadowing or ‘speaking for’ that community.

Is there a significant number of male allies in Nigeria?

I would say no. It is rare to find male allies in Nigeria both offline and online – to the point that those that exist are easily known.

Have people ever questioned your role as an ally?

Men do so several times, often suggestively, on the premise that there must be a reward or approval that I am aspiring to. Some think being an ally is evidence of a weakness of character, in an extension of the dominant male/subservient female narrative. Conversely, in the early stages of my advocacy, I got pushback from women who considered my advocacy inadequate or problematic, and I would later realize they were right even though at the time it felt like I was misunderstood.

What is the role of a male ally in the feminist movement in Nigeria?

There are several ways male allies can put their resources at the disposal of the feminist movement, from providing access to platforms that can make women more visible, to contributing financially to projects. One important role, in my view, is for male allies to keep educating other men – whether in person or online – on behavior by men that continues to sustain patriarchal norms, and the need for men to develop a new understanding of what it means to be a man that is not based on the repression and oppression of women and sexual and gender minorities.

Olugbodi Israel is a 25-year-old digital painter and illustrator who became outspoken about equality in 2018, during this period he went through an ideological revolution after deconverting from Christianity. For him, allyship means humility, listening to learn and unlearn, and a deliberate effort to acknowledge male privilege so as to avoid using it to perpetuate oppressive norms and standards against all marginalized groups.

Why is there a very small number of feminist male allies in Nigeria?

I genuinely do not know if there is a reasonable number, because there is no substantive research on the matter, to my knowledge. I think it would be difficult to ascertain, because not every man who may call himself an “ally” positively functions as an ally in the movement for equality and the liberation of women from patriarchal injustices.

What are the roles of male allies in the country?

Magnifying the words, critiques & voices of feminists; working to inform themselves on feminist literature, instead of waiting for women to educate them online all the time; participating in protests pushing for justice for women or the betterment of women’s lives; creating safe & considerate economic, social, and/or political opportunities for women where they can do so; and holding themselves & other men accountable, calling them out when perpetuating ideas & attitudes detrimental to women.

Are there any challenges to allyship?

Other than the occasional ridicule by misogynists who accuse you of only supporting feminists for the return of sexual favour and things like that. I can’t think of anything I’d call a significant challenge to be a feminist ally personally, as a man. The only real thing I can say is a challenge is having to unlearn years & years of patriarchal conditioning. You never really know what toxic notion you still hold even after rigorous introspection, so you always have to be self-aware, never getting too comfortable or arrogant enough to believe that your allyship is immaculate.

Ani Kayode Somtochukwu is a 21-year-old openly gay, award-winning writer and queer liberation activist, who became a supporter for equality at a very tender age. His classmates in secondary school always taunted him for “taking the side of girls” during arguments that involved equality. His politics developed more in his late teens, when he started fully identifying as a feminist ally.

What does allyship mean to you?

Allyship to me is recognizing that we do live in a cis-hetero-patriarchal society built on capitalism and the subjugation of women, both socially and economically. Allyship means understanding that it is not the sole goal of women to dismantle this system, especially since we actively participate and benefit from it, whether we theoretically oppose it or not.

Allyship to me is listening and centering marginalized women, poor women, trans women, disabled women, etc, and looking at how best we can support their quest to dismantle this system. Allyship to me means decentering the ego, understanding that feminism is not about us or our feelings, but about the liberation of women from gendered violence and the dismantling of the socio-political system that reinforces this violence.

Do you think men should regard themselves as “feminists”?

It’s very complicated. Technically by definition, anyone can be a feminist, but then considering that this is a liberation struggle, we have to understand that we as men do not share the experiences of women which is what informs their praxis.

I want an equal society that is free of exploitation, but I have never lived in the shoes of a woman for one day, so I don’t get to decide what liberation looks like for women or who gets to the boundaries of the term. So yes, I understand the argument that men shouldn’t regard themselves as feminists. I used to call myself a feminist and after a woman explained this to me, I decided that “Feminist ally” was a more descriptive term because it more accurately encapsulated my position concerning women’s liberation struggle.

What advice will you offer for younger or new allies in the feminist space?

Basically, to stop thinking that it’s about them, and stop making it about THEIR self-actualization or about proving to themselves that they are “one of the good ones”. If you don’t decenter yourself, it’s impossible to be a good ally to any oppressed group.