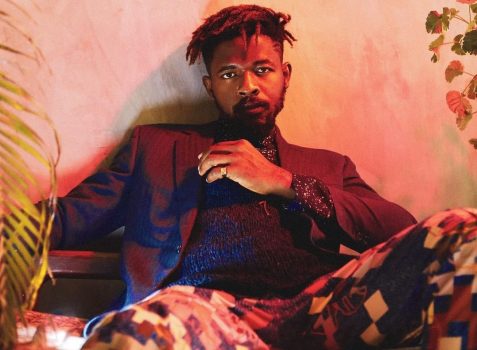 It’s December 30, 2020. A dimly lit studio plays host to a young man with plaited hair, wearing a black long-sleeved t-shirt on which is printed “Mystery Girl”. Holding a small microphone is surrounded by a group of six instrumentalists: three men clutching guitars, two drummers, and one violinist. They are in the middle of a live concert, which is virtual – as with many things in 2020 – and they are barely past the twentieth minute. After taking a breather, the man holding the microphone breaks into a cover of Seal’s “Kissed By The Rose”, and the engagements in the live streams – Facebook, Instagram and YouTube – go up two notches. Account handles with female names drop comments on Instagram Live in the lines of “you must sing at my wedding” and “you make me miss the boyfriend I don’t even have”. As if he spots these comments, the crooner looks into the camera and smiles. There is a chance that he wouldn’t be too surprised at such reactions, he is used to the adulation.

The positive reception enjoyed by Nigerian musician Johnny Drille has not come overnight. He has had to carve a niche for himself, create a level of artistic consistency, and cultivate a following to whom his craft would appeal.

Born John Ighodaro at Benin City in 1990, the folk singer-songwriter always knew he wanted to be an artist, having started out from an early age at the church pastored by his father. In 2006, the choir boy began to learn about music production, but it was all within the confines of the church.

In 2012, Drille graduated with a degree in Sociology and Anthropology from the University of Benin, Benin City. The following year, he participated in Season Six of the MTN Project Fame music talent show, finishing tenth.

After his exit from Project Fame, Drille decided to pursue a full-time music career. He began to pay for studio sessions and record his own music, and his 2015 cover of “Aww”, a single released by Mavin superstar Di’Ja, made an impression on Mavin CEO Don Jazzy.

In June 2015 he recorded “Love Don’t Lie”, but it was the release of the ballad “Wait For Me” in August 2015 that established Drille as a singer to watch out for, the latter getting nominated for Best Alternative Song at the 2016 edition of the Headies. During the Rocktober concert which was held at Freedom Park, Lagos in October 2016, Drille performed another single, “My Beautiful Love”, as well as a cover of Jon Bellion’s “All Time Low”.

In February 2017, Johnny Drille was officially signed to Mavin Records. His growing fan base had mixed reactions to the announcement, with a few skeptics predicting that his style of music would change to something more “mainstream”. Drille put paid to these speculations with the release of the well-received “Romeo and Juliet” shortly after he was unveiled by Mavin. The song was featured in the 2018 Nollywood romantic comedy Royal Hibiscus Hotel, and earned him nominations at the 2018 Headies for Best Male Vocal Performance, Best R&B Single, Best Alternative Song, and Next Rated Artist. However, he failed to win in any of the categories, an outcome to which he responded:

“Sadly I couldn’t win in any of the 4 nominations at the #headies2018 but that I was nominated means I must be doing something right. It only gets better from here.”

In June 2018, he released “Hallelujah”, a romantic duet with R&B songstress Simi, who had released her commercially successful debut album Simisola the year before. In October that year, he hosted the maiden edition of his live concert Johnny’s Room Live at Muri Okunola Park, Lagos. 2019 proved to be a very busy year for Drille, as he released five singles: “Smile”, “Forever”, “Papa”, “Finding Efe” (which won Best Alternative Song at the 2019 Headies) and “Count On Me”. He also hosted the second edition of Johnny’s Room Live, this time selling out tickets at Lagos and Abuja. 2020 was relatively quiet for him, with only “Something Better” and the London-produced “Mystery Girl” being released. Early this year, he released the waltz-themed “Bad Dancer”, which didn’t quite tear up the charts, but was well-received by his fans.

Drille’s creative prowess extends to music production, too, having perfected the journey into sound engineering he started at the age of 15.. He has done studio work for some of Nigeria’s lesser-known but immensely talented singers, including the alternative rock artiste Clay (“The One”, 2018), as well as Afro-soul crooners Cill (“Baby Girl”, 2017) and Gemma Ofili (“Through My Skin”, 2020). He also supplied the rhythm for “Jaiye”, a single released in 2019 by rapper and label mate Ladipoe. The love that Drille gets for his art is not necessarily because his penmanship has been compared to the likes of international crooners Ed Sheeran and Jon Bellion, or because his vocals are eerily similar to those of Passenger and Owl City. The main reason why he is adored by female middle-class millennials is that his music speaks to a demographic that still wants to believe in love, that still cares about long walks and candle-lit dinners, that is still enthusiastic about chocolates and flowers. He also enjoys an organic relationship with his fans, frequently interacting with them on Instagram and Twitter.

In a music scene where many songs sound pretty much the same, Drille’s artistry is a breath of fresh air. He enjoys a following which he has earned, and his thriving career lends weight to the argument that you don’t have to go mainstream to succeed in Nigeria. Fans are patiently waiting for a full-length body of work, but for now, they can close their eyes and smile as they listen to a man who reminds them that it’s okay to be hopeless romantics.