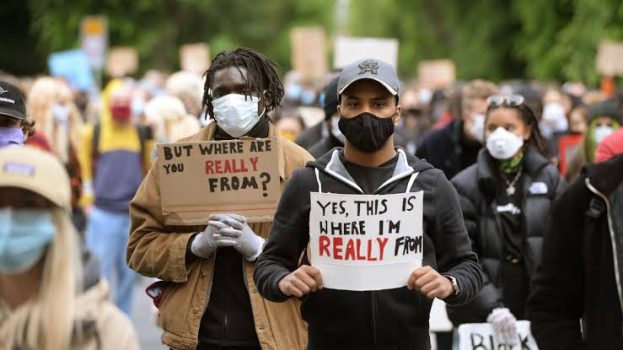 Unpacking my Black African Identity: Do All Africans Fit in Africa?

As the South African local elections have come and gone and results given, I am all the more confused as to where South Africa is going, or worse still, where it wants to go? To answer these questions, you would only need to read the various white papers issued by the State with the “National development plan 2030.”

Reading more like a love sonnet to woo the more optimistic of us, the plan aims to reduce poverty and inequality by 2030 through growing an inclusive economy and promoting leadership and partnerships in the society. In 2021, the goals of the project should ideally be in full swing in its ambitions. However, the more objective of us would suggest that real inequality and poverty have, in real terms, increased since the end of apartheid, and shows no sign of abating for the majority of the population. It is a particularly hard pill to swallow. The reality is, the ‘simple’ cost of a morning coffee in South Africa is close to half what more than 30 million people live on in a month.

When understanding inequality in these terms, it’s easy to understand how the inequality that is pervasive in South Africa is not only about access to social provisions, but one in which those who are lucky enough to have benefitted from the social gains from the end of apartheid effectively live in another world from the majority, yet having the administrative mandate to understand their needs, dreams and aspirations whilst also pursuing their own. Although the past is the past, it has long arms.

There is something slightly sinister when those who understand the struggles of simply trying to make ends meet have seemingly forgotten about, not only the relative poverty experience but also the social implications of such a situation such as gender-based violence, drug addiction, and the sense of hopelessness many youths feel. Don’t let people driving fancy cars fool you!

Living in South Africa, it becomes evident that neighbourhoods are effectively existing within a twilight world, one difficult to burst. The way the country was developed ensured that no single group of the populace could effectively witness the poverty or glamour in which other groups lived.

This style of development has created an environment where people never truly know how “other people live.” This reduces the likelihood of people coming together to address a particular issue. Spatial planning in South Africa, thanks to the past regime, effectively ensured that people from the higher earning brackets are never disturbed in view of the economic system from which they benefit. For example, while watching the news, I saw the footage of a community protesting about being deprived of electricity. I watched the news on my TV with electricity, and I thought: “What did they do to not have electricity?” This thought, as a citizen, is in itself problematic. As we work to reduce poverty in our country, we simultaneously create them. There is identity politics being used to hide the severe underperformance of the state.

The municipal elections and COVID-19 have been a watershed moment that have set in motion an increasingly dangerous precedent in the continual evolution of South Africa.

When I thought about writing this piece, there were a few angles on inequality that I thought of discussing. Would it be from a purely racial view? That wouldn’t be ‘just’ as I have black Zimbabwean heritage and know of the effects of xenophobia perpetuated by ‘traditional’ South Africans, so no one is ‘good.’

Regardless of race, the xenophobic vibe can be strong, regardless of the fact that my family members were relegated to living in townships, having arrived close to a hundred years ago with permission and served within the medical sector for betterment of the black populace. When I started writing the piece, I didn’t know where I wanted it to go. It was an expression of my frustration. Perhaps it was COVID-19, or the thunder growling outside my window as the rain came, stopping the satellite TV from working.

Either way, the frustration is there. The recent local elections in South Africa were a trigger to the underlying disappointment of the status quo, which looks set to continue.

When I mention ‘traditional’ South Africa, it is only due to the fact that my family has effectively lived in South Africa for close to a hundred years but have maintained a lineage to Zimbabwe as black South African/Zimbabweans.

The duality of historical legacy, however, never precludes my pride as a South African citizen, and proudly so. The true test of such identity and feeling comes when everyone around you says you do not “measure” up. It is at this point when I ask: who is a South African by their measure? The responses yet again show that these others regard themselves as the core, and everyone else is second to them. The definition of what is or who is South African, is therefore determined not by ‘merely’ being a citizen but by the understanding of how the person you may be speaking to sees you and themselves. It is scarier when representatives of the state conduct themselves with such biased leaning.

In such a reality, it’s becoming increasingly evident that there are groups within the populace who do not fully understand the nature of citizenship. It is bothersome having to constantly prove yourself in a society you are always seen as a “foreigner.” One throws oneself into contributing to the society through academia, entrepreneurship or employment is where things get complicated for a black South African.

Having attended schools and worked in South Africa with individuals from a range of countries and ethnic groups, having a ‘black’ identity that is not easily molded within a nationalist Bantu African experience seems to be something that is not readily accepted. In my case, the best way to term my lived experience is one of being a “Third Culture kid,” someone raised in a culture other than their parents and lives in a different country for a significant part of their childhood development years. When you move around the world through parts of your life, you start to mark similarities and differences of practised customs, and start to negotiate the values you wish to internalise. Your views and values cannot be simply coloured with one brush but rather with a collage of various sensibilities. Hence, citizenship is something I hold dear as my culture is not attached to a singular ethnic grouping or country.

Growing up, I held a strong belief that my talents and skills could serve the South African republic in my international pursuits. I was given the honour of meeting former President Nelson Mandela in China, where he whispered a message that I hold close to my heart to this day. I wish I could say the exact words of his message, but as time has left us, it has become more of a dream rather than a path that had started all those years before.

So where does this reality leave us? To be honest, I have no idea. Perhaps a continuation of the status quo, back and forth squabbling with an occasional windfall win which barely covers the excessive degradation that has been taking place for decades. For example, a win would be that those born of parents who did not have primary education would have a 70% chance of attaining primary education in South Africa. This would be reflected in the schools the children attend, resources available, and maybe, more importantly, whether they proceed further than primary education. After all, do we not educate people to join the workforce? But I digress. The status quo is the continual marginalisation of the perceived African migrant who, despite legality, I believe experience disproportionate acts of violence and discrimination in various contexts. As political parties vie for votes using polarising tactics, the results are unknown particularly in a country that has a history of disunity based on cultural and racial heritage.

One such party that has done well in this election is Action SA, which has been criticised as being xenophobic for wishing to deal with illegal immigration in the country and specifically in Johannesburg. When looking at the values of the party and aspirations, there is little for one to think there is nothing nefarious taking place. But then again nothing seems as it is. This is where the fear lies. In the heat of the rhetoric is the moment for people to reflect on who they are attacking. Are they Mozambican or Zimbabwean? Or is there merely an oops when the murder victim is a Venda from the border near Zimbabwe, or perhaps someone with a speech impediment who ‘sounds’ foreign.

With so many holes in the proposed efficiency Action SA feels it can deal with illegal immigration, there is no adequately-equipped or trained civil servants to handle the cases of legal or illegal migrants. There is a scent that suggests that such a trajectory will embolden the negative elements of society. This can be as large as The Zulu King emboldening xenophobes, when people lost their lives during violent outbursts, to as little as some administrators being ‘difficult’ in processing my little sister’s schooling documents because they didn’t consider her, based on her name, to be South African. This is a form of discrimnation. What makes it more upsetting is that my sister is one who has proven herself beyond expectations, and limiting her tertiary education would be a form of wishing she never existed as ‘that type’ of African

The complexity of identity is feeling like you are in a barely-formed, airless, obscure world, floating, with little to tie you to a single place, forever swimming in the nothingness that you were seemingly encouraged to reach for as a means of furthering the “Pan-African” vision. You are now an explorer, and doing anything less feels like the suppression of your soul and purpose.

The question you ask yourself now is whether to land in the same country from which you originally left, or become a member of another “space programme.” We ask if one feels there is meaning in this suppression as we all did in the early years of South African freedom and Zimbabwean independence. Time will tell. The sad thing is, time is not absolute.