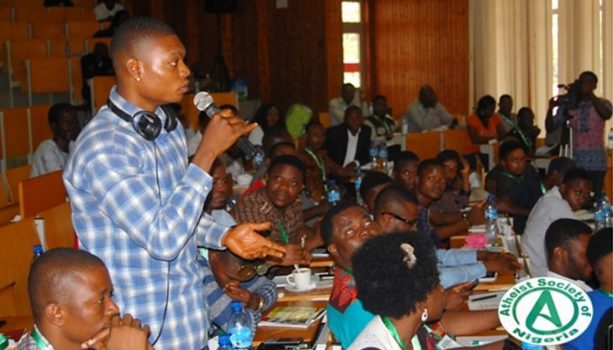 Is Atheism Slowly Catching On In Nigeria?

Atheism is the absence of belief in the existence of a god or deity. In African countries that are largely religious and conservative like Nigeria, the atheist population is scanty, and often subjected to unwarranted criticism.

Religion is like a governing pillar in Nigerian society. Religion largely influences the norms, social attitudes, dressing, expression, way of life, and even state laws for every Nigerian citizen. Denouncing any of the two major religions – Christianity and Islam – can pose a threat to one’s human rights.

Atheism in  Nigeria is hardly expressed in public., However, for Nigeria’s younger demographic, atheists are becoming more visible, especially on social media. Various atheists around the country have rallied together on Twitter, Whatsapp, and Facebook. They share ideas, thoughts, ideologies and even debate religious persons on these platforms. Organizations like the Atheist Society of Nigeria, the Humanist Association of Nigeria, and the Nigerian Secular Society have also been registered by Nigerian atheists in the past few years.

Mubarak Bala, who was the head of the Humanist Association of Nigeria, was arrested by state police in Kaduna state on 28th April 2020, facing persecution for exercising his right to freedom of speech and his atheist views. Several atheists and humanist organizations home and abroad have created awareness, called out the violation of his rights, and worked towards his release. As of today, however, Bala has still not been freed. The hashtag #freemubarakbala trends on social media once in a while.

Udy, 35, embraced atheism in 2017. For him, being an atheist in Nigeria is a challenge; he finds that the more outspoken a person is about their unbelief, the more people and relationships they lose. Friends and family of Udy have severed ties with him, from relatives who try hard to keep their kids away from him, to an ex-girlfriend who ended their romantic relationship after asking him to stop being outspoken about religion. A close friend of his also blocked him on all social media platforms because they couldn’t stand his views.

“The journey to atheism is a lonely, painful route. But over time, as I connected with more agnostics and atheists, it became easy to bear,” he says.

Tessy, 27, shares similar experiences after ditching organized religion three years ago. According to her, navigating life as an atheist queer woman in Nigeria is burdensome. Finding a community is difficult because everywhere she goes in the country, everyone she sees is religious, and the only way to find someone who shares her views is by surfing social media. Christmas eve at her job was a terrible memory: all her coworkers had invited her to attend a church service when she refused and told them she wasn’t a believer, and they responded by barking at her with fear-mongering statements.

“It is super lonely to be queer and atheist in Nigeria, you just end up performing in public and walking on eggshells,” she notes.

Some atheists hide their identity to avoid backlash and unsolicited evangelism from religious people. Preaching in the streets, houses, buses, and even ceremonies to “spread the word” is a widely known trait exhibited by religious people, especially Christians.

Benita, 18, is tired of the fact that everything is tied to religion in Nigeria, as she is often questioned by her religious friends for her unbelief. As a child, she always questioned religion and never believed what her parents and churches told her, but wasn’t public with her atheism until she met more atheists online.

“A common response to atheist views by religious persons is to “respect people’s beliefs,” which is ironic because most religious people and bodies do not respect the views of those that do not conform to their beliefs. Religion can and should be called out, especially when it has been used as a tool to harm others. Atheists here are not seen as normal, so I guess I have to write ‘Christian’ when filling forms, and deal with Christians preaching to me all the time, because if I refuse them and tell them I’m an atheist, I don’t know what would happen”, she explains.

Throughout human history, religion has continuously been used as a weapon to create structures of oppression that have harmed marginalized groups. In imperial and colonial times, Europeans preached Christianity while attacking the cultures, traditions, and gods of indigenous Africans. Genocides and economic pillaging have been committed in the name of the Abrahamic god. To this day, many Africans suffer selective amnesia with respect to their traditional and cultural precolonial history. Slaves and colonized people were even forced to convert.

In recent times, religion is still used to deny other human beings their fundamental rights. Women are subjected to sexism and misogyny in various parts of the world, and religious fundamentalists use terrorism to harm others. Disabled persons are used as props for “miracles”’ or insensitive gospel sermons. LGBTQ+ people are oppressed in countries like Nigeria where state-sanctioned laws are heavily favored by a huge chunk of the uber-religious population.

Temi, 18, a nonbinary bisexual, became an atheist before realizing they were queer. Their atheism helped them accept their queerness easier and saved them from a lot of internalized queerphobia.

‘I never had to battle with the idea that I was a sin,” they say. At the beginning of their self-discovery of atheism, their parents tried to force them back to religion by making them pray while they stayed home, and they blamed Temi for every bad thing that happened to them.

Judith, 17, is a queer atheist who is afraid of the outcome of disclosing her unbelief in God to her family. For this reason, she always participates in prayers with her mother. Like Temi, she never realized she was queer until she was free from the shackles of religion. As a closeted queer person and atheist, she still lives in fear and anxiety of both identities being exposed to the (Nigerian) public.

“Being queer and atheist means watching your back, because society hates you, and fighting for liberation can come at the cost of your life” she says.

Reconciling religion with queerness has been a struggle for LGBTQ+ people all over the world. This issue is sensitive for them because religious bodies have been known to be hostile towards queer people. After suffering demonization, dehumanization, self-hatred, and forced conversion therapy caused by religion, most queer people divorce themselves from the religious institutions they once aligned themselves to, while some still struggle with finding acceptance and love from religion. For those who are both queer and irreligious, it’s double trouble.

Bim, 20, considers the state of Nigeria to be clear evidence of how terrible religion is. The country currently struggles with poverty, bad leadership, corruption, oppression, tribalism, and gender inequality. Many Nigerians have been praying for a better situation in the country since the dawn of time, but their faith has not fixed these problems. If anything, religion is a cog in the wheel of the country’s progress.

“Atheism gives me freedom, but it also fuels my anger at Abrahamic religions for the evil they do,” she opines.

Ijeoma, 21, allows herself to question religion because to her, its stifling nature is ingrained in Nigerian life, from exchanging pleasantries to reciting the national anthem. In her opinion, people in Nigeria cannot fathom the idea of not believing in a deity, without likening that unbelief to something monstrous. This makes it hard for her to be open about her atheism.

“It’s like telling someone the sky is green; they think there’s something wrong with you”, she says.

Ijeoma still suffers a form of “religious guilt” due to years of indoctrination. It took her a while to stop feeling this way, and she struggled fiercely with this guilt in the early days of distancing herself from Christianity. As a disabled person, she is also subjected to ableism and disrespect: one of her family members was always praying for her and expressed surprise at the fact that she did not get ‘healed’. The attitude of religious individuals towards disabled persons, which plays out in the form of unsolicited prayers, is insensitive and intrusive.

“I don’t need their prayers when I cannot come to their church because it’s inaccessible to disabled people”, she adds.

Ifeanyi, 23, recalls always being vocal about religion and the church, even before he fully became an atheist. Prior to being an atheist, he was very active in church: he was a cell leader, dance instructor, and head of several gospel clubs. He had an old friend who was on the same path to questioning religion with him, and they started studying the bible together, until they came to the conclusion that it was a book devoid of logic.

“To be an atheist, you can be whatever you want to be, you can be outspoken or quiet about your unbelief. There’s no rule on how to be one”, he says.

For some atheists, their views encompass the realms of agnosticism in which they claim that the existence of any deity is unknowable or unknown in fact. Tobi, 20, revels in his freedom from organized religion and the status quo. He expresses the need for other atheists, especially the younger ones, to keep challenging the status quo and stay open-minded. He still urges any atheist who might be exposed to danger physically and psychologically for their view to stay careful.

“Being an atheist has helped me make rational decisions for my life, and I know I’m the one in charge of it, there is no ‘God’s will’ that I’m subjected to. I’ve been able to view the world from a different perspective, love people I was taught to hate, and care more for the planet, because I know there is no place after this”, he says.

Atheists and irreligious people still face discrimination and persecution in Nigeria for their views and existence. If the freedom of belief is a human right, then so should freedom to unbelief, whether outspoken, raging, closeted or silent.