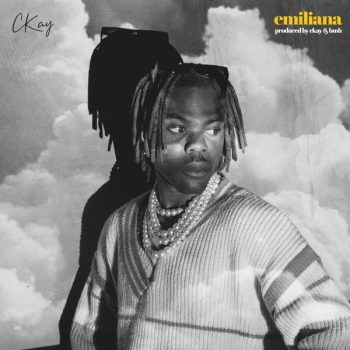 Ckay Scores Another Hit With Romantic Visuals For “Emiliana”

For the video, director Ahmed Mosh decided to take this love tale to the streets of Dakar, Senegal where Ckay professes love to a certain girl named “Emiliana.”

I think we can all agree on one thing, and that is Ckay is the truth! The singer is currently pioneering a new musical and cultural wave of rendering acoustic versions for every single he releases. Following the upsurge in YouTube views for some of these acoustic covers like “Love Nwantiti,” “Beggie Beggie” collaboration with Ayra Starr, and his recent smash-hit, “Emiliana,” other artistes like Magixxx and Khaid have decided to follow suit.

Warner Music act, Ckay, had a year to remember in 2021 when his Monster-hit track “Love Nwantiti” which was originally released in 2020, had a life-changing impact on the singer’s life. He immediately rose from obscurity to being one of the most recognisable voices in the world. After releasing an emo version of the same song in the last quarter of 2021, he carved a niche for himself as the first emo afrobeats singer in Nigeria to gain global recognition. “Love Nwantiti” went on to become the most Shazamed song in the world, breaking download and streaming records. The song has been used in numerous TikTok videos and Instagram skits by fans and celebrities alike.

The singer is set to repeat same yet again, with the release of the long-awaited visuals for his romantic tune titled “Emiliana.” The record was produced by BMH and Ckay, and the video was shot in Senegal by director Ahmed Mosh.

Ckay who has been nicknamed “Africa’s boyfriend” is currently living up to his name as a smooth musical seducer, and it is strongly advised to resist the urge of introducing your girlfriend to him as it may potentially end in premium tears for you.

For the video, director Ahmed Mosh decided to take this love tale to the streets of Dakar, Senegal where Ckay professes love to a certain girl named “Emiliana.” In the video, Ckay confesses the love he has for her, and the level of influence she has over him. He sings: I dey on the phone all night long, no be small thing wey you do to me oh no no. Being in the company of the one we love and one who loves us in return is one of life’s rarest blessings, and young love at times could be likened to hot wiring a car; it’s an instant spark. The opening scene shows Ckay holding a camcorder filming his surrounding, the beautiful scenery in Dakar. He then reminisces about his lover, as scenes of both of them holding hands and taking a walk down a park is shown. The pair is later seen relaxing at the bay area while Ckay strums his guitar, serenading his lover, and at the same time whispering softly into her ears. Subsequent scenes show Ckay’s lover handling the camcorder this time filming Ckay. Afterwards, they take a tour round the city in a tour bus and then get cozy in each other’s arms. The video ends with the pair kissing on a mountain top as the director fades out the scene and then showing Ckay again, sad, alone and holding his camcorder. 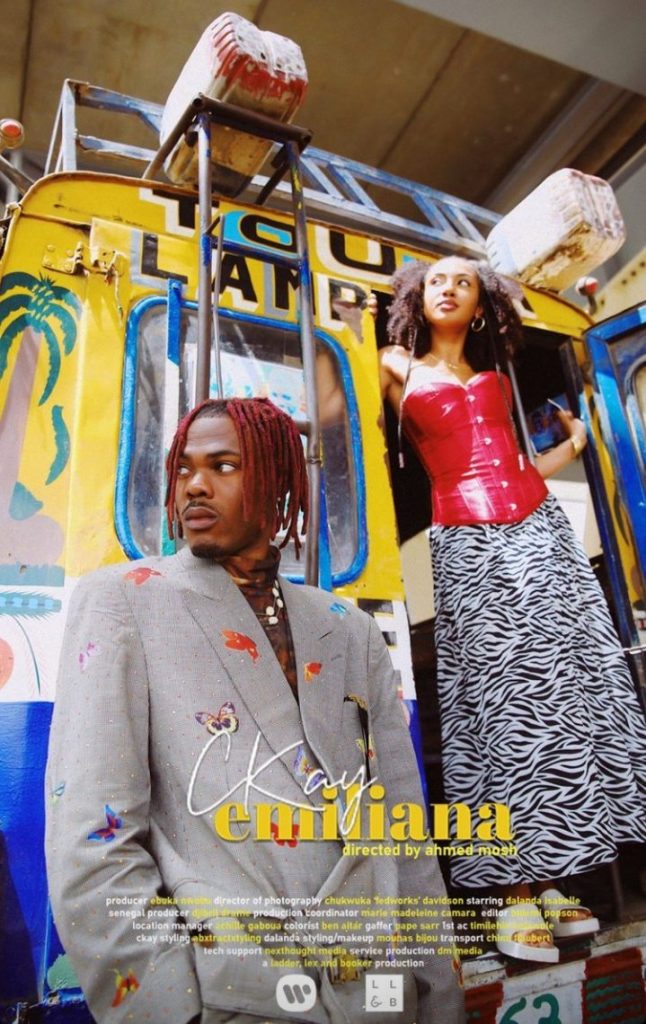 Mosh who was formerly contracted to Priorgold pictures, home to ace video director, Director K, is now signed to Ladder, Lex and Booker productions. Mosh put his video directing skills on full display in this very intimate video. The gorgeous model, Dalanda Isabelle played Ckay’s love interest, Emiliana, in this flick, and the combination of the pair worked like magic. The couple enjoyed some nice outings, engaging in activities you would naturally find two lovers doing. If you are without a partner, and intend to watch this video, it could trigger the need for you to want to get one. One of my favourite scenes in the video was of Dalanda Isabelle, at 2:24 playtime where Mosh took a high-angle shot of Isabelle standing alone on some rocks by the waterside while performing in a sensual manner. At 2:33, things start to get heated up when Mosh takes a close-up shot of the pair dancing together while Ckay seduces her, humming softly into her ears.

Another one of my favourite scenes was a wide shot taken of Ckay and Isabelle taking a walk in front of the Les Niayes Sarraut Garden Center Dakar, holding hands. Another of such scene was that of the singer and the model taken at playtime 1:35 when the director dolly-zoomed in on the pair while the singer stands in front of a bus covered in graffiti paintings, and the model is in the bus, leaning on the singer. Intermittently the director throws some beautiful cutaways of the seas, birds flying over water to give the video that complete romantic aura. Cutaway in a film or video is the interruption of a continuously filmed action by inserting a view of something else. It is usually followed by a cutback to the first shot. Ckay’s stylist, abx put some amazing pieces together for the singer, making him look very dapper.

The video is an amazing one, and this explains why the views on YouTube seem to be increasing by the day. It currently has over 4 million views in less than a week of its release. Go watch and enjoy!

Omowale Michael Bokinni is a trained Cinematographer and Screenwriter. He is an Alumnus of the prestigious Royal Arts Academy Lagos. Passionate about all things music, movies and entertainment in general. He is also an actor who has featured in a number of Nollywood movies. Most recent; the Royal Arts blockbuster Bitter Pill. Instagram @omowalebokinni. Twitter @bokinnio